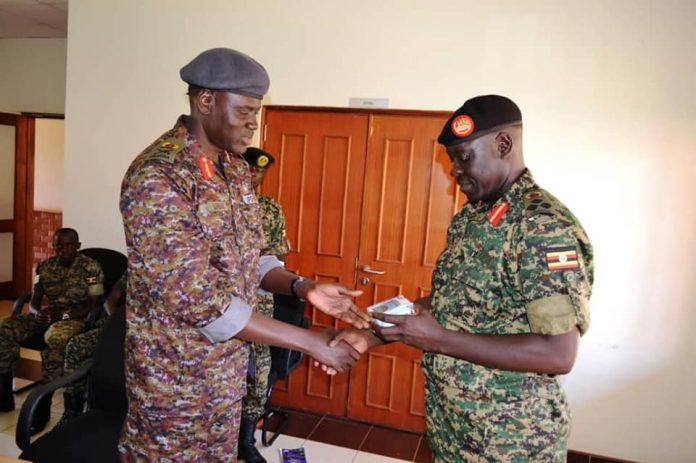 Maj Gen Paul Lokech has handed over the office of Commandant Uganda Rapid Deployment Capability Centre(URDCC) to the in coming commandant Brig Peter Gaetano Omola at a function presided over by the Chief of Defence Forces(CDF) Gen David Muhoozi at URDCC headquaters Jinja.


This follows the appointment of Maj Gen Lokech as Chief of Staff Airforce (COS-AF).
In his remarks , Gen Muhoozi congratulated both Maj Gen Lokech and Brig Omolo upon their new appointments.
“Hand over and takeover is a culture in UPDF now because it helps in accountability and orientates the incoming person. Thats why we have made it part of our Standing Operating Proceedures(SOPs)” Gen Muhoozi said.

He particularly commended the outgoing commandant Maj Gen Lokech for putting a mark and setting a pace within a short time by improving the infrastructure like completing the communication house and establishing a Level II Hospital for UN to validate at URDCC which will help the incoming to thrive.
Gen Muhoozi further observed that URDCC is now a functioning center which has prepared UPDF to establish capabilities in peace keeping missions on the African continent.


The CDF urged the incoming Commandant to train more personnel because his job needs innovation so as to attract attention. He advised him to liaise with PSO- Singo since they complement each other.
While presenting his report, Maj Gen Lokech first thanked the UPDF leadership for appointing him as Chief Of Staff-AF.
He then said that URDCC was established by guidance of the AU in 2010 basing on what was happening on the continent.
He advised the incoming Commandant to continue lobbying for more resources in order to enhance performance of the centre.


Brig Peter Omola, extended his appreciation to the UPDF leadership for the appointment and thanked the outgoing for laying a firm foundation for him.
He accepted to takeover the office and urged the URDCC staff to support him and deliver as expected.
The Ceremony was attended by the Joint Chief of Staff Lt Gen Joseph Musanyufu, the Chief of Training and Recruitment Brig James Kinalwa, Commandant NCOA Col Saad Katemba, the head of civilian component Ms Amanda Magambo, and staff members of URDCC among others.