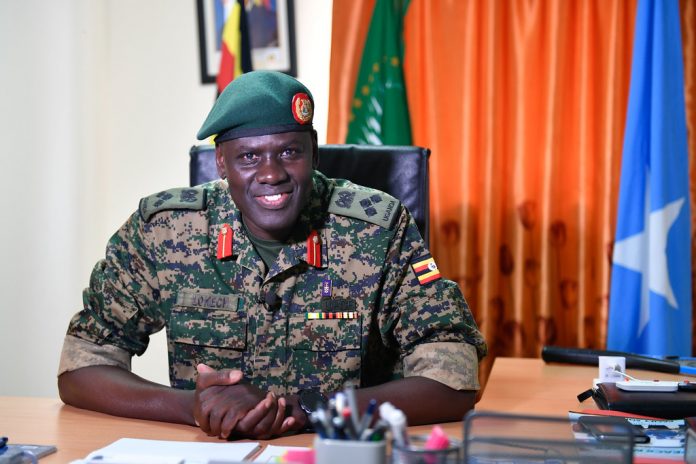 
He made the remarks while congratulating the former UPDF AMISOM contingent commander upon his selection to serve on a special assignment in South Sudan.
‘ ‘There is no doubt that he [Maj Gen Lokech] is one of the very qualified officers in view of his broad knowledge and tested experience in handling such complex situations.’’ Brig. Karemire said on Tuesday.

He added: Maj Gen Lokech’s excellent performance in Somalia where he served two tours attests to it.
Late last year, the warring parties in South Sudan signed an agreement to form a unity government, which would see rebel leader Machar return to government as vice president. The government of national unity was supposed to have been implemented by May this year before elections in 30 months the period. However, following meeting in Kampala chaired by President Museveni, the period was extended to allow time to discuss and agree on key issues.


While in South Sudan Sudan, Lokech is expected among others to oversee the integration of the armed forces.
The special assignment involves among others to monitor on behalf of the guarantors of the South Sudan peace process, the assembling, screening, demobilization and integration of the armed forces of South Sudan
Maj.Gen.Lokech has served as part of Uganda’s peace-keeping forces in South Sudan and was also part of the Operation Safe Have in which the UPDF launched an offensive against Allied Democratic forces in the Democratic Republic of Congo.


He also served as the UPDF second division commander, based in Makenke barracks.
During that period, Brig.Lokech is credited for a number of battles that broke Al Shabaab insurgents’ backs before earning him the nickname, the “Lion of Mogadishu” from Somalis.


Brig. Lokech has served as Uganda’s Defence Attaché to Russia and also as Commander of the UPDF Second Division’ He was also posted to Jinja as the commander for the Uganda Rapid Deployment Capability Centre. He was in February 2019 promoted to the rank of Major General.