Home Lifestyle Gen Kyanda: kinship relationship, interdependence of communities has made it hard to... 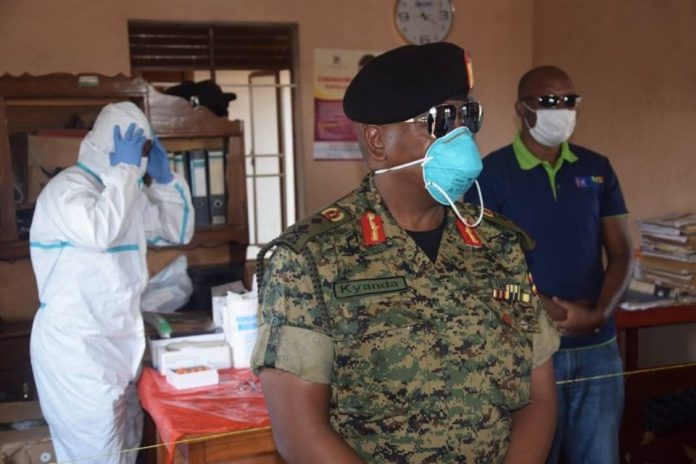 
The team that first visited Malaba and Elegu on Sunday completed the last leg of the inspection after a four-day visit to Mutukula, Mirama hills, Cyanika, Bunagana, and Mpondwe border posts.
Maj Gen Kyanda said the purpose of the visits were to interface with the Regional Task Forces in a bid to draw solutions to the problems affecting the implementation of the government anti COVID-19 directives on border closure and Cargo trucks movement.
He observed that from the interactions with the task force, some of the challenges they faced were related to Coordination.

He said a key recurring issue in all the regions is violence against security agencies, something he strongly condemned. He, however, called on the security members to always exercise restraint when under such situations but not be cowed.
“Do not allow the State to be subdued by such peoples. Appropriately employ the law and your rules of engagement to ensure we protect our people from situations that may lead to increased spread of COVID-19. Make sure such people are arrested and charged,” said Maj Gen Kyanda.


The General further observed that despite considerable deployment by UPDF along the borderline, kinship relationship and interdependence of communities along the porous borders has made it hard to implement border closure.
“Nevertheless, we have done our best and intercepted thousands of people trying to cross the borderlines especially through the hard to reach spots,” he said.