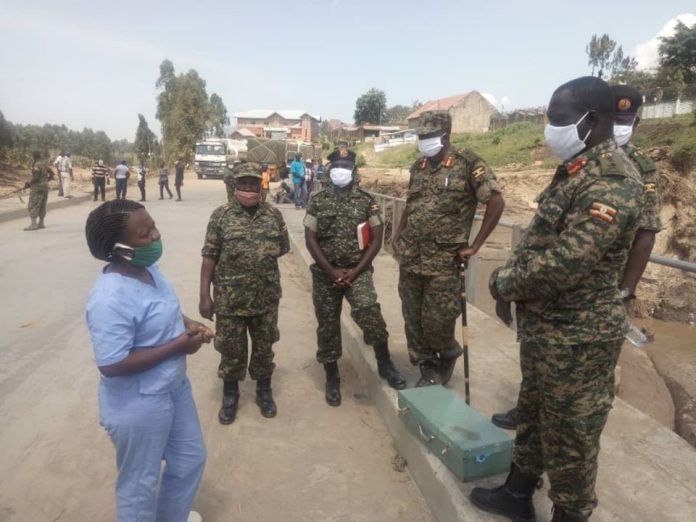 The Commander Land Forces (CLF) Lt Gen Peter Elwelu is on a three-day working visit to Rwenzori Sub-Region at Ugandan Western border to assess the operations, welfare of troops and combat readiness of UPDF Mountain Division.
The CLF said; “I am on routine visit of Formations under Land Forces. It is important that we routinely visit our troops in the field so that we understand the real situation under which they operate. In this way, we are able to assess the welfare and combat readiness of our gallant fighters so that we can support them appropriately.”


He added that the good health of soldiers is part of welfare and the prevention of all diseases, including the current threat of COVID-19, is one of the prime roles of every commander. On that note, he urged the commanders to ensure that their soldiers keenly follow all the guidelines on the prevention of COVID-19, while conscious of other health threats.
“Troops must follow the Presidential directives and Ministry of Health guidelines to fight against COVID-19. But please don’t forget the other enemies such as HIV, malaria and typhoid,” he said.
The CLF said that part of the reason for his visit is to discuss with the commanders and local leaders on UPDF response to the floods currently affecting the Rwenzori Sub-Region.

He thanked the Officers and men of the Mountain Division for the good work done so far in response to floods in the sub-region, supporting the national and district task forces in ensuring compliance of the guidelines issued by government to prevent the spread of COVID-19 while at the same time ensuring border security.
Gen Elwelu urged the Forces to maintain the operational tempo in ensuring border security and remain conscious of the cross-border threats posed by negative forces such as Allied Democratic Forces as well as the non-military threats such as Ebola.


The Mountain Division was formed last year as part of the professionalization drive of the UPDF and building capacity to handle special operations. The Division is trained and equipped to operate on high and ragged terrain as well as forest and extreme weather conditions.