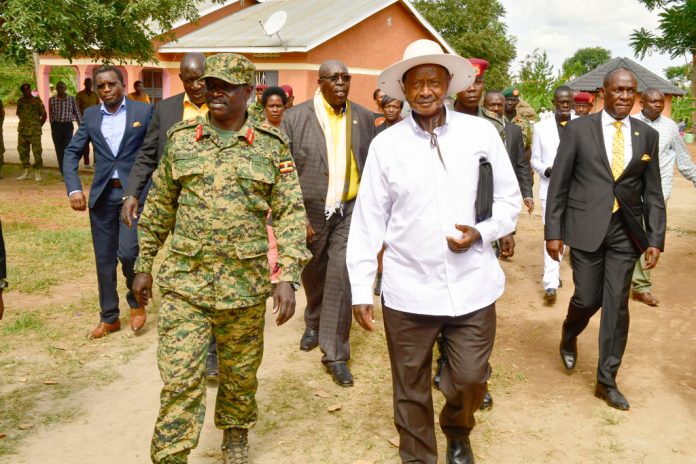 One thousand thirty-nine Officers and Militants of the Uganda Peoples’ Defence Forces (UPDF) have honorably retired from active service in the Forces after most had completed 20 to 40 years of service to the nation and the region.
Due to the COVID-19 situation in the country, the retirement ceremonies were conducted in eleven centers across the country to ensure social distance.
The Commander Special Forces Command (SFC), Maj Gen James Birungi presided over the ceremony for the retirees under his command at Entebbe SFC Headquarters whereas the Deputy Commander Air Forces, Major General Tumusiime Katsigazi presided over the ceremony for Air Forces personnel at Entebbe Air Forces Headquarters.


All the Division Commanders presided over the function or were represented by senior Officials in their areas of responsibilities in Masindi, Kakiri, Mbarara, Mbale, Gulu, Pader and Kabarole respectively.
The biggest number; 362 Officers and Militants were retired from Land Forces Head Quarters in Bombo where the Commander Land Forces (CLF), Lt Gen Peter Elwelu was the chief guest.
The CLF urged the retirees to consider being there for their families as one of the core issues to do on retirement.
“You have been very busy and did not have time for your families, now you finally have the time,” he said adding that the retirees need to stay in their villages and concentrate on agriculture which is the backbone of Uganda’s economy and not run to the cities.

“Now that you are going home, I encourage you to go to the garden. When God created us, he put us in the garden, not in the cities,” he said.
He also urged them to continue promoting peace and security while in their communities and shun all those that are deemed to create instability in the country.
“We have to make sure this country remains peaceful for this is the only Country we have, that God gave us,” said Lt Gen Elwelu.
Finally, he urged them to be ambassadors of government in spreading the messages aimed at protecting the people of Uganda against COVID-19. He shunned those who say there is no Corona virus and showed concern at the level of defiance by Ugandans in following the Ministry of Health guidelines against COVID-19.


“COVID-19 is not a dream, it is real. Go and be ambassadors for humanity in your communities,sensitize against COVID-19 as per the Ministry of Health guidelines. The problem with we Ugandans is being very stubborn. We are only lucky that God is with us otherwise we would have paid heavily.” He said, adding that Ugandans need to stay indoors as guided and that it is God’s will that the world is under lockdown.
“Tell your people that it is not government putting us under lockdown but God’s will. As per places of worship, they belong to God, if God so wants us to open them, he will create the condition to open them, stop blaming the President,” he said.