Home Lifestyle Gaagaa bus with 60 passengers on board catches fire, burns to flames 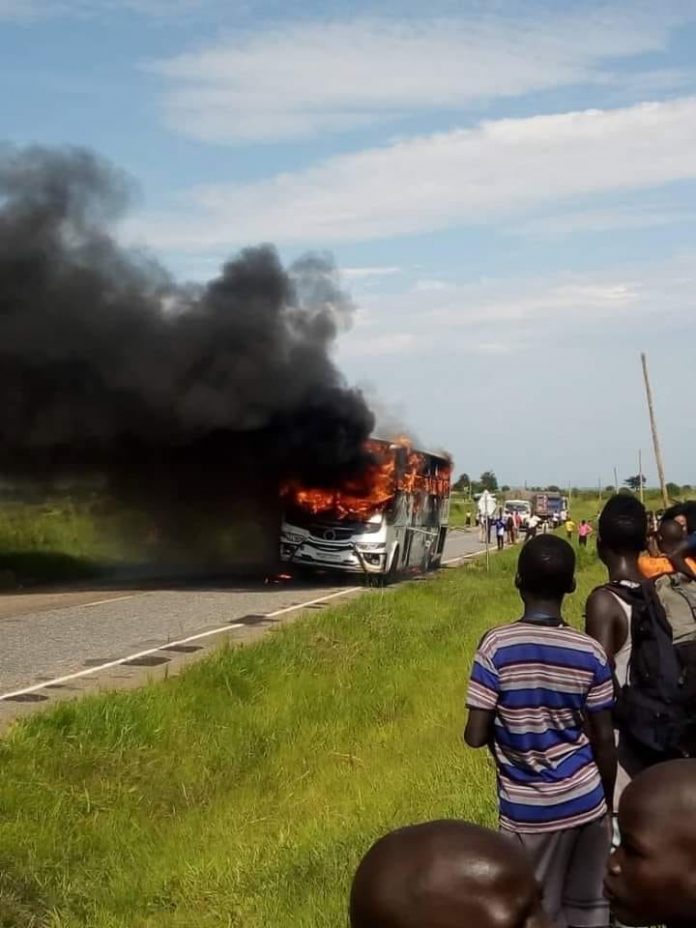 Gaagaa Bus registration number UBD 991Y from Kampala to Koboko, on Sunday afternoon caught fire around Mbaro Oryang East Village, Nyaravur Sub County in Nebbi District
According to Gaga bus officials, the more than 60 passengers on board managed to escape unhurt. The driver is on the run. While the driver Kayim Kayimbi is still on the run.


The traffic officer blamed the accident on tire burst. “We shall continue to monitor the situation closely as we handle those who lost their property,” said Denis Juma, the manager Nyaravur Gaagaa Bus Terminal
June 2019, Eight people sustained injuries following a bus accident that took place along the Pakwach–Karuma highway, in Nwoya district. The accident occurred when a Kampala-bound Gaagaa bus, registration number UAL 158Z from Paidha hit an elephant that was crossing the road, from Murchison Falls national park.

In January, this year, one person was killed and nine others were critically injured in an accident involving a Gaagaa bus in Nakasongola district along the Kampala-Gulu highway.
May 2018, at least 22 people, including four children, were killed following Gaagaa bus accident. The crash occurred in Kiryandongo, a town about 140 miles north of the capital, Kampala. The accident involved a passenger bus and another large truck.


July 2018, another Gaagaa bus was involved an accident bus that killed one person and injured seven others in Kiryandongo district. The bus registration number UAT 559Y transporting passengers from Arua to Kampala veered off the road at Nyamahasa village in Kiryandongo.
Police said information obtained from the scene indicated that the bus attempted to overtake two trucks which were ahead of it.


June 2010, four people were killed and several others injured in an accident involving a bus belonging to Gaaga Bus coaches. The accident occurred at Sasira village in Nakasongola as a result of a tyre burst that forced the bus to veer off road and over turned several times.


This was the third accident involving Gaaga buses within a space of one week. A few days earlier, two buses belonging to Gaaga coaches were involved in accidents and Kiryandongo and Burundi respectively. Unspecified number of the people were injured.