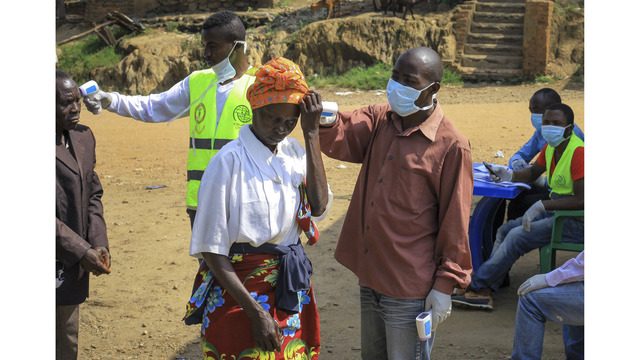 The Ministry of Health and World Health Organization (WHO) are identifying contacts of a person from the Democratic Republic of Congo who visited Uganda to trade in fish last week before returning to DRC, where she later died of Ebola.


At present there is no confirmed Ebola Virus Disease (EVD) case in Kasese District or any other part of Uganda.
Ministry of Health and WHO surveillance teams established that on Thursday 11th July 2019, a trader with symptoms consistent with Ebola had been in Uganda to buy fish at Mpondwe market.
She was a well-known and regular trader at the market. The surveillance teams established that she had four episodes of vomiting on the day she was in the country.

On Friday 12th July 2019, she travelled back to Beni and was admitted in the Beni Ebola Treatment Unit (ETU) on Saturday 13thJuly 2019. She died on Monday 15th July, 2019 in the ETU after testing positive for Ebola. She did not use the formal border entry point where she would have passed through temperature screening and provided with necessary care by the health workers.
WHO said in a report that about 590 fishmongers at the market could be targeted for vaccination, and it had yet to establish the woman’s movements or who had transported her or her goods.


Ministry of Health and WHO appeal to all Ugandans to remain vigilant and alert. Avoid handshaking, hugging, mass gatherings and observe infection, prevention and control practices such as washing hands with soap and clean water at all times both at health facilities and communities.
The ministry also appealed to the general public and international travelers to Uganda to always seek information on Ebola from official government or WHO sources to avoid misinformation. Unfounded rumors circulated on unofficial social media platforms should be ignored.