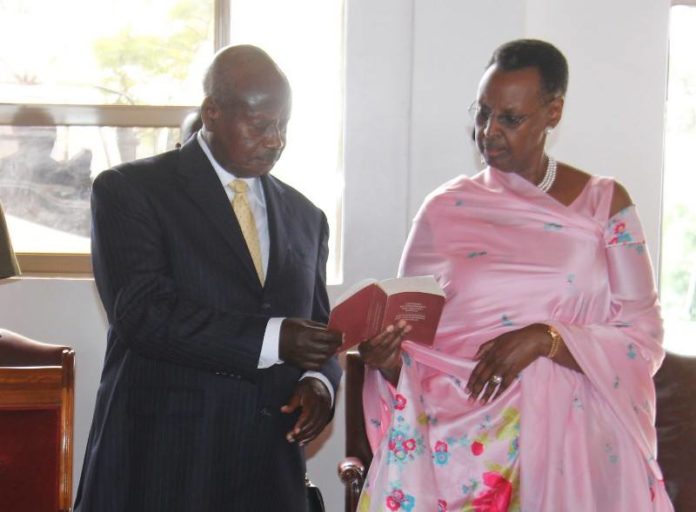 
Education and Sports Minister, Hon. Janet Museveni, has urged the Head Teachers to always pray to God whenever they are executing their duties.


“I thank God who has enabled me to meet in person this army of educationists. I believe all of us have learnt or have been taught something from this retreat. You must learn to pray to God because He is the enforcer; you are just mere small instruments in the hands of the Almighty God. The children who come to you are God’s package. Your work is to unpackage them into what they can be,” she said.


She was last evening speaking at the closing of a two-day Secondary Schools’ Head Teachers’ Retreat at State House, Entebbe. 3,000 Head Teachers from both private and government aided Secondary Schools throughout the country, attended the first ever National Retreat, that was organized by the Ministry of Education and Sports, under the theme of ‘The Head Teacher as the First Inspector.’
Mrs. Museveni also called upon the Head Teachers to create a school environment that is not only limited to classroom or academic work but also one that encourages students to succeed and beautify wherever they live. She also informed school heads that the only way they could fight absenteeism in their institutions is to be present at the schools themselves, noting that this sets a good example to students and to the rest of teachers.


The Permanent Secretary of Ministry of Education and Sports, Mr. Alex Kakooza, commended Mrs. Museveni for working effortlessly to improve the quality of education in Uganda right after her appointment. He was happy that some of the objectives of the Retreat – sharing the best practices of inspection; enhancing transformation leadership, promoting efficiency and effectiveness in the use of school resources and upholding a culture of recognizing outstanding performance, were realized.