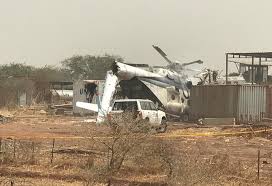 An Ethiopian military helicopter crashed inside a United Nations compound in the disputed Abyei region between Sudan and South Sudan, killing three crew members and injuring 10passengers, the UN said in a statement Sunday.


The statement said the helicopter was carrying 23 passengers when it crashed on Saturday inside the compound of the UN Interim Security Force for Abyei (UNISFA), “killing three of its crew members.”
“Ten passengers were injured with three in critical condition,” it said.
The MI-8 helicopter was carrying Ethiopian troops from Kadugli in Sudan to Abyei, which has been contested since South Sudan gained independence in 2011.


“We are investigating the incident,” said UNISFA’s acting Head of Mission and Force Commander Major General Gebre Adhana Woldezgu.
Ethiopia is the sole troop-contributing country to UNISFA, with some 4,500 soldiers on the ground.

The UN Security Council has warned that the situation in Abyei and along the Sudan-South Sudan border “continues to constitute a serious threat to international peace,” and called on the two countries to show concrete progress on border demarcation and monitoring.
///ewn