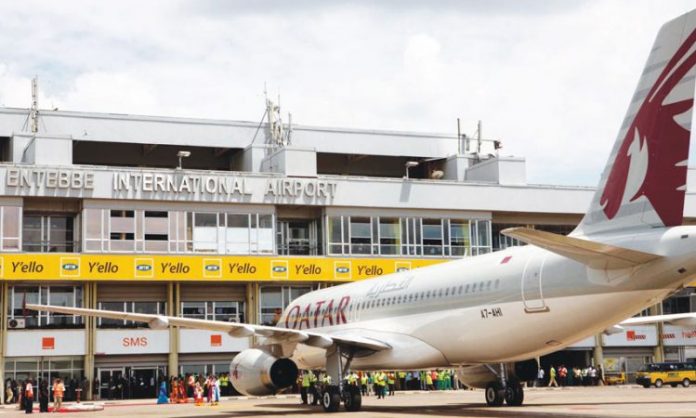 The China Embassy in Uganda on reacted to reports that the East African nation was risking surrendering the Entebbe International Airport to China over a $200 million loan (about Ugx. 713 billion).
The amount was secured through an agreement signed on March 31, 2015 between the government of Uganda and the Export-Import (Exim) Bank of China.


However, it was said, the agreement had ‘toxic’ clauses stipulating that if not amended Uganda’s sovereign assets were exposed to attachment and take-over as arbitration awards in Beijing.
Furthermore, reports from Uganda says that investigations established that any proceedings against Uganda Civil Aviation Authority (UCAA) assets by the lender would not be protected by sovereign immunity since the government, in the 2015 deal waived the immunity on airport assets.
Highly-placed sources in Uganda said the risk presented by the Financing Agreement of March 7, 2019 prompted the government to send an 11-member delegation to Beijing to plead with Exim Bank to renegotiate the clauses now impugned by Kampala. But, that was turned down, escalating the perils.


But, yesterday, the Chinese Embassy Spokesperson in Uganda, Mr Fang Yi, reacted to media reports, saying that China-Uganda cooperation has always adhered to the principles of openness, transparency, equity and mutual benefits.
“All loans agreements – including the Entebbe Airport expansion and upgrading project – were voluntarily signed by both parties after negotiations on an equal footing, and without any hidden terms or political conditions attached,” reads the statement in part.
“Terms of the loan agreement for the Entebbe Airport expansion and upgrading project are in full compliance with the prevailing conventions and practices in international financial markets.”
Mr Fang says in the report that malicious allegations that “Uganda surrenders key assets for China cash” have no factual basis, and are ill-intended to distort the good relations that China enjoys with developing countries, including Uganda.

“Not a single project in Africa has ever been confiscated by China because of failing to pay Chinese loans. On the contrary, China firmly supports – and is willing to continue our efforts in – improving Africa’s capacity for home-driven development,” reads another part of the statement.
Furthermore, Mr Fang says, China has been supporting the move to ease African countries’ debt burden, and it is actively implementing the G20 Debt Service Suspension for poorest countries. Indeed, China is among the highest deferrals among the G20 members.


Mr Fang says China will always respect and help Africa to pursue common interests – always putting friendship first throughout the cooperation.
“Even in the face of extreme problems of debt default, China has sought to reduce the burden of African countries through debt restructuring, mitigation and reduction by friendly negotiations,” he said.