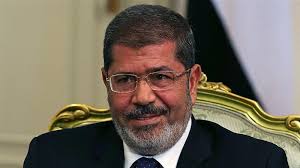 Egypt’s former president Mohammed Morsi, who was ousted by the army in 2013, has died in court, state TV says.
He reportedly fainted after a court session where he was facing espionage charges and subsequently died. He was 67.-the BBC reported.


Morsihas been in detention since July 3, 2013, and at one point was condemned to death, although that ruling has been overturned on appeal.

He has been sentenced to decades in prison in several cases, including one alleging he used unauthorized violence, arrest and torture to put down a protest outside the presidential palace, and another based on his leadership position in the now-banned Muslim Brotherhood group.


Other cases are still pending, including one recently adjourned until April 9, which alleges he organized mass prison breaks during the tumult of 2011.