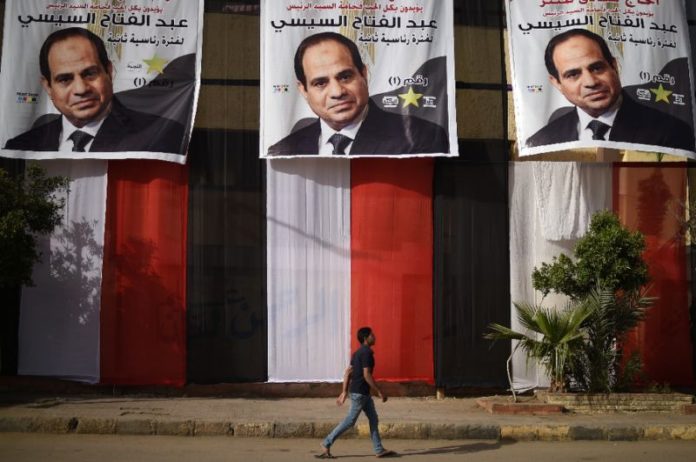 Egyptians vote in a presidential election Monday to choose between incumbent Abdel Fattah al-Sisi and a little-known candidate who has struggled to make the case he is not Sisi’s minion.


Polling stations open March 26 (today) for the three-day vote in which Sisi is all but guaranteed to win a second four-year term.

Security will be tight across the country. The Islamic State group’s Egyptian affiliate, which has killed hundreds of soldiers and civilians, has threatened attacks on election-related installations.


On Saturday, two policemen were killed in a car bomb attack targeting the provincial head of security for the Alexandria governorate. The security chief was unharmed.

Some 60 million people in Egypt, the most populated Arab country, are registered to vote on March 26, 27, and 28. Official results are expected on April 2.


They will have the choice between Sisi and Moussa Mostafa Moussa, who registered right before the close date for applications, saving the election from being a one-horse race.

Moussa, who has denied he is a “puppet,” had been leading a Sisi re-election campaign until the moment he registered as a candidate.
Other opponents have been side lined, including former military chief of staff Sami Anan who was detained in January shortly after announcing his candidacy.


The military said the reserve general broke the law by illegally declaring his candidacy.

In an interview broadcast on Egyptian television last week, 63-year-old Sisi said the lack of serious opponents was not his doing.

“I wish we had one, or two, or three, or 10 of the best people and you choose however you want,” he said.


Sisi had won his first term in 2014, a year after the former army chief ousted his Islamist predecessor Mohamed Morsi following mass protests demanding his resignation.
In that election, Sisi faced Hamdeen Sabbahi, an established left-wing politician much better known than Moussa. Still, Sisi won 96.9 percent of the vote.

With Sisi’s win effectively guaranteed, the authorities’ concern this year would be turnout to enhance the legitimacy of the vote.

Sisi has stressed in his pre-election appearances the importance of voters turning out in large numbers.

In 2014, about 37 percent of voters participated in the two-day election, prompting authorities to add a third day to obtain a final participation rate of 47.5 percent.


It is unlikely this year that even that 37 percent will be achieved, said analyst Mostafa Kamel al-Sayed.
“The result is known in advance, and this does not encourage Egyptians to go out and vote,” he said.

During the campaign, Sisi appeared frequently on television and in newspapers, hailing factories and infrastructure projects built in the past four years.

But with an economic crisis and gruelling price hikes – and the return of a regime seen as at least as authoritative as that of Mubarak – support for Sisi appears to be slightly in decline.