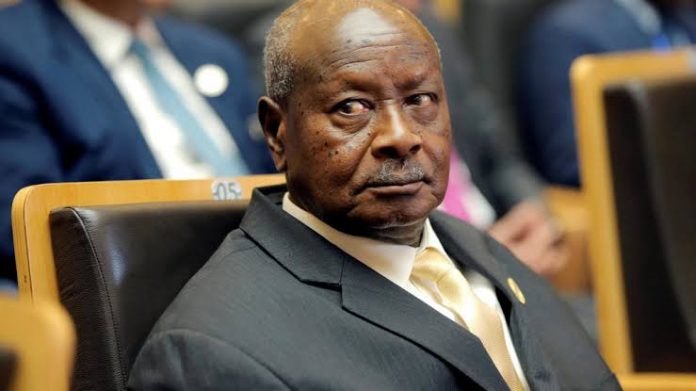 The East African Court of Justice (EACJ) is expected to make a critical ruling on President Yoweri Museveni’s bid to extend his 34-year by contesting in next year’s Presidential Elections.


The ruling is set for Friday, February 2020.
In a petition filed by city lawyer Male Mabirizi, the controversial lawyer wants the EACJ to determine whether a decision by the Constitutional Court of Uganda to extend the presidential term and age limit is against the East African Community (EAC) Treaty on democracy and good governance.

April 2019, Uganda’s Supreme Court appealing against the Mbale Constitutional Court decision, validated lifting of the age limit, paving the way for the country’s 75-year-old leader, to seek a sixth term in office.
“This appeal therefore fails,” Chief Justice Bart Katureebe declared in handing down the court’s majority 4-3 verdict.
In December 2017, One of Africa’s longest-serving leaders, President Museveni signed a Bill into law that removed the presidential age limit of 75 from the country’s Constitution, allowing him – [has ruled since 1986] — to seek re-election in the 2021 elections.


The 1995 Constitution, prohibited anyone younger than 35 or older than 75 from serving as a president.
Mr Mabirizi, has listed 84 grounds challenging the judgment that validated the lifting of the age limit. He delivered the 30, 692 paged record at the Supreme court on a pick-up.
Mr Mabirizi, is seeking “interim order of injunction restraining the Government of Uganda, from implementing any of the provisions of the Uganda Constitution (Amendment) Act, 2018.”


The EACJ, whose decisions are binding on member states, has been viewed as an independent court whose recent decisions have rattled the EAC governments.
According to the East African, The Ugandan legal team will further be supported by more than 10 lawyers in the case, a pointer that the government is not taking the case lightly.

Mr Mabirizi argues that the framers of the 1995 Constitution deemed it absolutely necessary to enshrine within the text of the Constitution, the two-term presidential cap, presidential age and abolition of the Kelsenian theory under Article 3 of the Ugandan Constitution.


“Such provision as would be necessary to give effect and operationalise the ideals encapsulated in the preamble as well the national objectives and directive principles of State Policy,” Mabirizi argues in his application.

These provisions, he argues, were designed and intended to guarantee orderly succession to power and political stability “which, to date, remains a mirage for Uganda.”


He argues that by amending Article 102(b) to remove the presidential age limit, after the earlier scrapping of term limits, Parliament rendered ineffective the preamble to the Constitution and also destroyed the basic features of the 1995 Constitution thereby rendering it “hollow and a mere paper tiger”.

He wants the East African Court of Justice (EACJ) to halt the implementation of the Uganda Electoral Commission Strategic Plan and Road Map for the 2020/2021 electoral period, until final determination of this matter pending before this Court.”