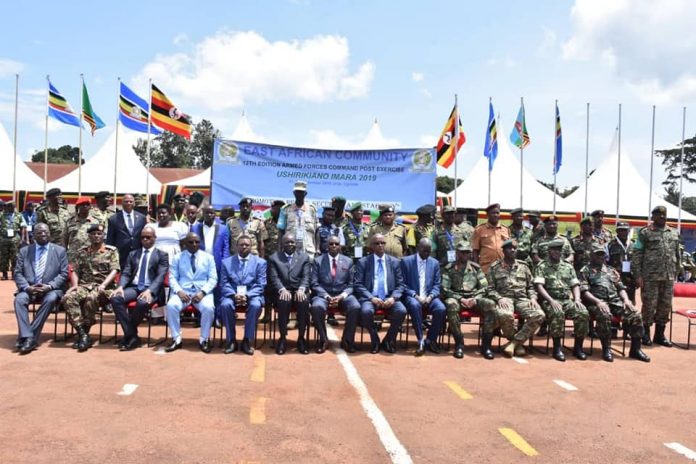 The Minister of State for Defence and Veteran Affairs Hon Lt Col (Rtd) Dr. Bright Rwamirama has said that the survival of the East African Community depends on cooperation, unity and purpose among East African brothers and sisters.


He made the remarks while officiating at the opening ceremony of the 12th Edition of the East African Community Armed Forces Command Post Exercise, code named Ushirikiano Imara 2019 at the Uganda Rapid Deployment Capability Center in Jinja district.
Hon Rwamirama explained that the security landscape has drastically changed, which calls for security agencies to jointly acclimatize to the new methods to mitigate new threats that include: natural and man-made disasters, terrorism, piracy and Cyber security.

“Embrace the spirit of cooperation as brothers and sisters to amicably enhance the EAC integration agenda through joint military training, engaging in joint technical operations and exchanging knowledge,” Hon Rwamirama told participants.
He encouraged them to always be prepared and ready to respond to any threat.
The UPDF Chief of Defence Forces Gen David Muhoozi said the exercise is meant to test and prepare forces for joint operations now or later. “Jointly training enhances cooperation and interoperability among EAC forces, police and civilians.


It also promotes the EAC integration process,” he said, adding that issues of security take centre stage in the region and beyond for socio-economic transformation to be realized and sustained.
The joint military exercise that started on 4th November 2019 is composed of members of the EAC Armed Forces and key civilian agencies from the six EAC Partner States.
The six contingents which will participate in military drills up to 17th November, 2019 will operate under the theme: “Promoting Peace, Security and Stability.”


The rotational military Command Post Exercise will be hosted by South Sudan in 2020.