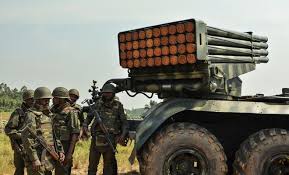 
A convoy that included General Philemon Yav, in charge of forces in the region, came under fire by the Yakutumba militia in Fizi district in South Kivu province late Thursday, a source said.

At least one soldier was killed and three were injured.
The attack came two days after gunmen in South Kivu abducted two members of the country’s powerful domestic intelligence agency, the National Information Agency (ANR), an army officer said. One of the two escaped.


However, a military source, speaking on condition of anonymity, said there had been “five dead” among the army. Another source said the toll had been “heavy” but gave no further details.
North Kivu and South Kivu — the two provinces which border Uganda, Rwanda, Burundi and Tanzania — are a deeply troubled region.
Rival militia groups hold sway over larges areas of territory, often competing for its rich mineral resources.


Last Saturday, the army announced an offensive in North Kivu against the ADF, which is suspected of murdering 14 UN peacekeepers last month.
Three troops were killed on Monday in an attack on Beni attributed to the ADF, a witness said.