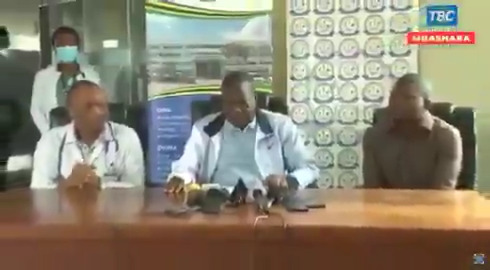 A distressing video of ailing Tanzania’s finance minister addressing journalists to debunk rumours that he was dead has been widely criticised, with many terming is as unnecessary and cruel.
Last week President John Magufuli dismissed the rumours, saying Dr Philip Mpango was “alive and improving”.
On Tuesday, Dr Mpango flanked by two medical workers, who were not wearing masks, addressed reporters at the Benjamin Mkapa Hospital in the capital, Dodoma.


He coughed and stopped to catch his breath several times as he read his statement.
It’s unclear what he is suffering from but he said he was having “breathing problems” and needed extra oxygen. He also said that he had recovered.
Opposition leader Tundi Lissu criticised officials for allowing the press briefing to take place.
“Who allowed a sick man to do this, he’s coughing and not wearing a mask. He should be resting and receiving treatment,” he said.
Mr Lissu said that it was “reckless”:

Dr Mpango became emotional at one point as he sent condolences and apologised for not attending the funerals of the late Zanzibar vice-president Seif Sharif Hamad, who died last week after suffering from Covid-19, and Chief Secretary John Kijazi and the former governor of the central bank Prof Benno Ndulu.
“It was sad that I didn’t attend any of their burial but I wish them eternal peace,” said Dr Mpango.
There have been several reported deaths in Tanzania linked to Covid-19 but they have either not been officially confirmed or the virus has been denied as the cause.


But in a change of course Tanzania has in recent days dropped its “Covid free” narrative and officials are now advising people to observe health protocols including wearing masks.