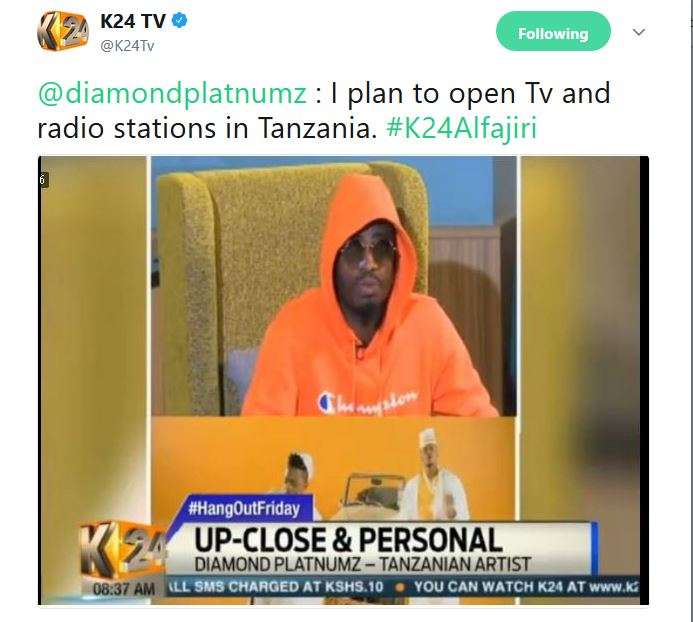 Forget Zari Hassan talk, Tanzanian singer Diamond Platinumz is moving on with his life despite break up with lover Zari Hassan.
The Tanzania music king on Monday received broadcasting license for his new television station Wasafi TV by the minister of information, Culture, Tourism and sports in Zanzibar Hon. Rashid Ali Juma.


He established the Wasafi Record Label and we will now be seeing Wasafi TV and Radio which is bound to shake up the TV/radio industry as Diamond is very popular back home.
“Our goal is to create jobs for our journalists who are yet to be employed, to appreciate that without them today we would not be here, but also joint collaboration with our country Media in developing new talent from the streets in art, sports and Culture industry,” he said.

The television based in Zanzibar is set to start official broadcasting soon.
This announcement comes a few days after we exclusively revealed that the singer got paid 6.5 Million Kenya Shillings to perform at Crayfish Camp in Naivasha for the Chrome Invasion New Year Party.


The organisers also paid 105,000 Kenya Shillings on Day 1 for the singer to sleep at Hemmingways and on day two 156,000 Kshs was spent at Enashipai Resort & Spa in Naivasha. The concert organisers also catered for his and his entourage’s plane tickets and travel in the country.