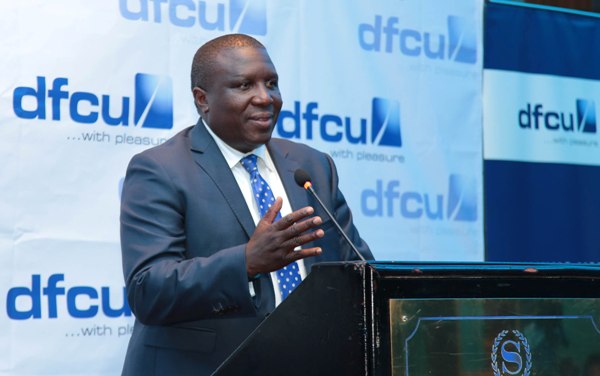 
On 27th January 2017, Dfcu Bank took over Crane Bank,– three months after the troubled lender was placed under statutory management by the central bank.
Mr. Mugerwa explained that DFCU participated in the resolution of two banks in Uganda, namely, Global Trust Bank Limited in 2014 and Crane Bank Limited in 2017.
He said, in both cases, bank’s participation was at the invitation of Bank of Uganda
The dfcu Group has been in Uganda since 1964 and has over the years been associated with many success stories in the economy

‘‘As with any other commercial entity, dfcu must consider all opportunities for growth when presented in line with its strategic objectives. Growth can be organic or inorganic’’ he said.
As at 30 June 2018, when dfcu last published results, the chairman said, the bank had total assets of Ugx. 3 trillion, total customer deposits of Ugx. 02 trillion, loan portfolio of Ugx. 1.4 trillion and total equity of Ugx. 485 billion
According to Mr. Mugerwa, The CBL transaction presented dfcu with growth opportunities which not only had benefits for its shareholders, from a return on investment perspective, but also for its depositors with regard to broadening the network for delivery of services to them


The committee was told that dfcu had demonstrated its ability to seamlessly integrate acquired business and agility in decision making when it acquired the GTB business in 2014
DFCU takeover of Crane Bank bears fruits
The dfcu team told parliament that the benefits accrued to the economy as a result of dfcu’s participation in the Crane Bank transaction include stabilization of the financial sector; and customer confidence in the banking system was maintained
‘ ‘Due to dfcu’s participation in the Crane Bank transaction customer businesses continued uninterrupted; and more than 50% of CBL employees were retained and continue in gainful employment’’ Mr. Mugerwa said.


Adding that, As a result of dfcu’s participation in the Crane Bank transaction close to 600,000 depositors were and continue to be paid without reference to the Depositor Protection Fund or additional government resources in form of liquidity support to CBL

read: The rise and fall of Crane Bank: here is what went wrong