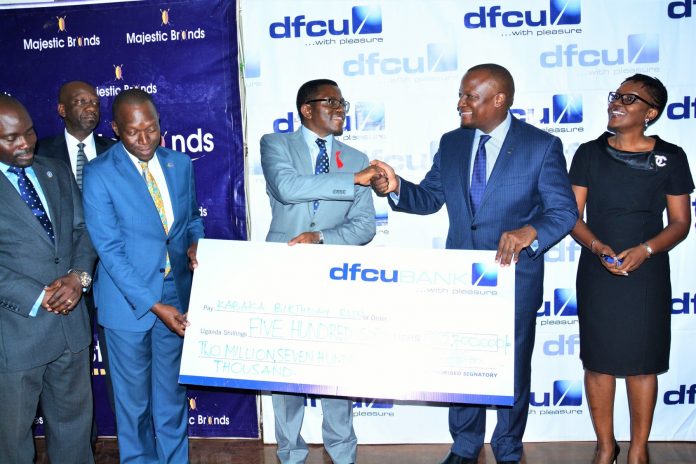 dfcu Bank in partnership with the Buganda Kingdom has announced a three-year partnership that sees the bank become the official bank sponsor for the Annual Kabaka Birthday Run.


The sponsorship unveiling happened at the Buganda Kingdom offices in Bulange, Mengo where dfcu Bank was represented by its CEO, Mathias Katamba who signed an agreement and handed over a UGX 562,700,000 cheque.
For the next three years, the Kabaka’s Birthday Run will be championed under the cause; ‘Men against AIDS to save the girl child’, which is aimed to drive awareness about HIV/AIDS and encouraging men to get tested, get treated and ultimately protect women against infection. This partnership is in line with dfcu’s Corporate Social Investment intervention area of maternal & child health in the context of HIV/AIDS.

Speaking during the official unveiling, dfcu Bank’s CEO, Mathias Katamba said;
“Despite the significant progress in the last decade resulting in a 58% decrease in AIDS-related deaths and 57% decrease in new infections, there is a need for more collaborative effort to drive awareness and testing.”
“We believe dfcu’s partnership with the Buganda Kingdom will ensure a sustained understanding that testing for HIV is an essential gateway to HIV prevention, care and treatment. This is in line with our commitment to the long-term wellbeing and uplifting of the communities in which we operate,” Mr Katamba added.


The Katikkiro of Buganda, Owek. Charles Peter Mayiga applauded dfcu Bank for the support
“The Kabaka Birthday Run has been growing in stature and impact, in terms of tackling different social issues, over the last six years. For the next three years, we will hold the Kabaka Birthday Run with the intention of addressing HIV/AIDS.’’


He added: We believe that with more partners like dfcu Bank, it is possible to contribute significantly towards the fight against HI/AIDS. I thank dfcu Bank for joining this cause and together we will secure our children’s future
In 2019, the Kabaka Birthday Run recorded total participation of over 50,000 runners, placing it among the top five Runs in Africa. Since its inception, over UGX 1Billion has been raised and donated to selected causes including Fistula Awareness and treatment as well as Sickle cell awareness and testing.