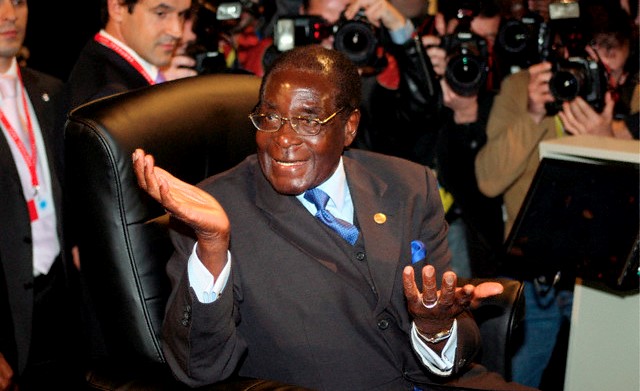 Lawmakers in Zimbabwe plan to begin impeachment proceedings Tuesday (today) against President Mugabe after he ignored a deadline to step down.
Members of the ruling ZANU-PF party expressed hope the process could be completed within a week.


The impeachment motion includes charges of abusing his authority to name his wife, Grace Mugabe, as his successor. Mugabe took that step after firing popular military hero and former Vice President Emmerson Mnangagwa.
The 93-year-old president has shown no sign of willingly leaving the office he has held for four decades, and planned to hold a Cabinet meeting Tuesday.
A notice by Mugabe’s chief secretary announced on Tuesday morning’s Cabinet meeting at State House and said all ministers “should attend.”

However, a tweet by one minister, Jonathan Moyo, indicated that several had left the country.
Mugabe has been under house arrest since last week when the military seized key state institutions. The country’s top military official said Monday that Mugabe was in touch with Mnangagwa, who was expected to return to Zimbabwe soon.
Meanwhile, Mugabe has agreed to direct talks with the former Vice President he recently fired, the country’s military chief said Monday.
Emmerson Mnangagwa has been out of the country since Mugabe ousted him earlier this month. His ouster triggered a political crisis amid repeated calls for Mugabe to step down.


Zimbabwe’s military has agreed with Mugabe on a “roadmap on the prevailing situation in the country,” Gen. Constantino Chiwenga told reporters. Mnangagwa will soon be returning to Zimbabwe to meet with the veteran leader
.
“The nation will be advised on the outcome of talks between the two,” he said.
Mugabe’s ZANU-PF party, which he co-founded and led for nearly four decades, ousted the 93-year-old as party leader on Sunday and gave him an ultimatum — relinquish the presidency by midday on Monday or face an impeachment vote in Parliament. The party has said it will introduce that plan to Parliament on Tuesday.


Mugabe has refused to answer repeated calls to step down even after effectively being stripped of his powers.
A source told CNN that Mugabe had agreed to terms for his resignation in talks with military leaders who have seized control in the country, and that a letter had been drafted.
Speculation over Mugabe’s next move has been rife since the President’s speech on Sunday, the most bizarre public moment since the military staged its apparent coup.


Not only did he defy expectations to stand down, he fumbled over the pages of his speech, which covered broad topics such as business and tech initiatives, and appeared to skip over entire sections.
CNN quotes source as saying the aim of Sunday’s televised address was to ensure the veteran leader openly declared the military’s actions to be constitutional.
Mugabe did so, but he was visibly displeased at the entire choreographed affair.