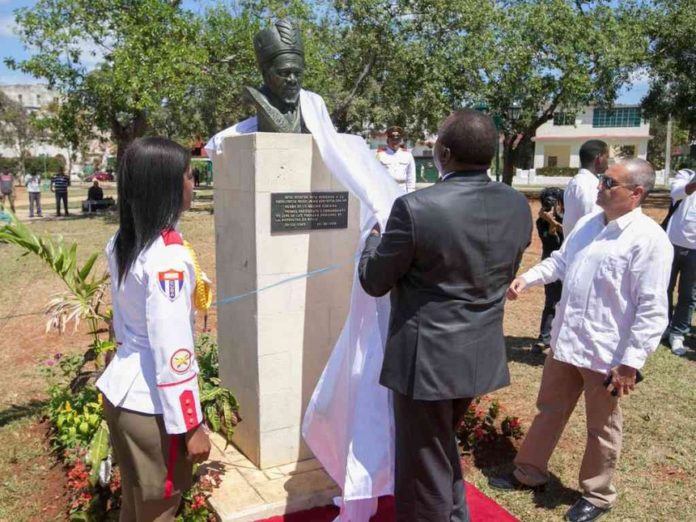 Cuba has honoured Kenya’s founding leader, as a towering figure in African and Caribbean liberation movement.
A bust of founding President Mzee Jomo Kenyatta was unveiled at the Park of African Heroes in Cuba on Thursday at a ceremony attended by President Uhuru Kenyatta.


The Cuban Minister for Culture Cuba’s Culture Minister Abel Prieto termed the late Kenyan founding father as an icon whose example of heroism inspired many to take up arms against the colonial masters.
“Kenya’s rich liberation struggle story became a big inspiration to the Cubans resistance against imperialism,” said the Cuban Cultural Minister.

Speaking during the unveiling ceremony, President Kenyatta thanked people of Cuba for their selfless and persistent solidarity with the African people and said Africa and the African peoples would forever be grateful to Cuba as they have been the biggest benefactors of Cuba’s revolutionary stance.
“Africa will forever cherish its relationship with Cuba. Together we will continue to forge mutually beneficial partnerships for the prosperity of our peoples and nations,” said the President.


Mzee Jomo Kenyatta’s Bust is the 17th of the African Heroes on display at the Park.
The park was built for heroes who relate to the liberation struggle of African independence from the colonial powers.
“I take this opportunity to thank you and the people of Cuba for your solidarity and comradeship in the African liberation movements against colonialism, settler imperialism and apartheid,” said the President.


The recognition of the Late Mzee Jomo Kenyatta as one of African Heroes is a clear manifestation of his premier place among others in African history.
“It is worth noting that during the Cuban revolutionary war, Fidel Castro named one of the Brigades the ‘Mau Mau’ in honour of the freedom fighters in Kenya,” President Kenyatta said.
//// pulselive