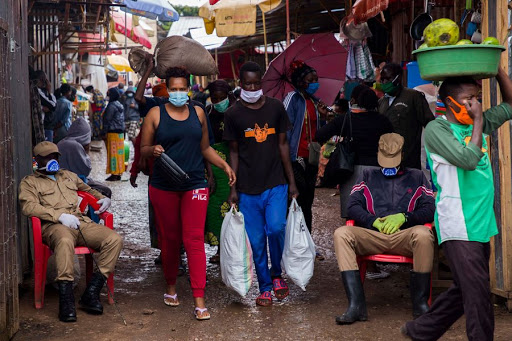 The authorities in Rwanda’s capital, Kigali, have announced that people will be fined $10 (about UGX. 36,500) for not wearing face masks in public or not wearing them properly.
The same fine will also be imposed for violating the two meter social distancing rule in public, or ignoring the night-time curfew.
According to the BBC, Organizers of parties and other illegal gatherings could be fined $200 (about UGX. 730,000) and those who attend $25 (about UGX. 91,250)


Rwanda has so far reported more than 4,200 Covid-19 and 17 fatalities.
It has been praised for being effective in the fight against the disease, and is the only country in sub-Saharan Africa whose residents are allowed to enter the European Schengen zone.
Rwanda was the first country in sub-Saharan Africa to impose a total lockdown after confirming its first cases in march this year.
Some people who violated restrictions were taken to stadiums or school buildings where they were forced to sit all night or day.

Two weeks ago, the country hit a record 217 cases in one day and has recorded a third of its 3,625 cases in the past 10 days, with authorities blaming the spike on complacency and fatigue with social distancing measures.
After a cabinet meeting chaired by President Paul Kagame, the government announced that a national curfew would be tightened to 7pm-5am from the current 9pm to 5am.
“Because of increasing cases of coronavirus in Kigali City, public transport between Kigali and other districts has also been banned,” read a statement from the government.


All transport is banned in and out of Rusizi where there has been a significant increase in cases
Other measures such as the closure of bars, wearing of masks in public, limiting of staff in offices and ban on public gatherings will remain in place.
.