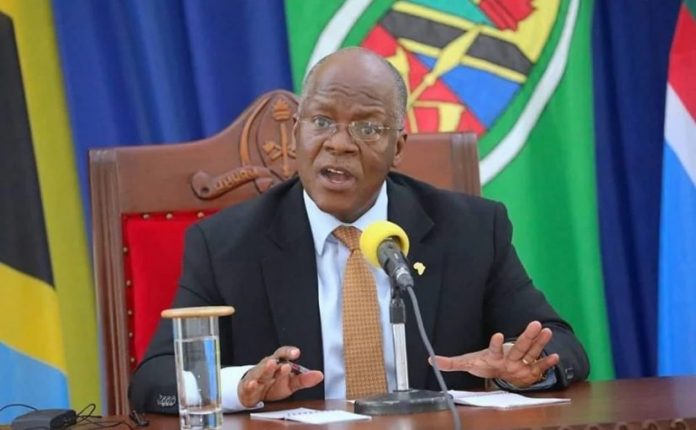 Tanzania’s president is finally acknowledging that his country has a coronavirus problem after claiming for months that the disease had been defeated by prayer.
Populist President John Magufuli on Sunday urged citizens of the East African country to take precautions and even wear face masks — but only locally made ones. Over the course of the pandemic he has expressed wariness about foreign-made goods, including COVID-19 vaccines.
The president’s comments came days after the country of some 60 million people mourned the death of one of its highest-profile politicians, the vice president of the semi-autonomous island region of Zanzibar, whose political party had earlier said he had COVID-19. The president’s chief secretary also died in recent days, though the cause was not revealed.


Magufuli, speaking at the chief secretary’s funeral in a nationally televised broadcast on Friday, urged the nation to participate in three days of prayer for unspecified “respiratory” illnesses that had become a challenge in the country.
Tanzania has not updated its number of coronavirus infections since April as the president has insisted COVID-19 had been defeated. Tanzania’s official number of coronavirus infections remains at just 509, but residents report that many people have become ill with breathing difficulties and hospitals have seen a rise in patients for “pneumonia.”
Meanwhile, a Few hours after President Magufuli called on Tanzanians to continue taking precaution against the novel coronavirus, the Health ministry has come out boldly to admit that the pandemic exists.

The Ministry of health has now urged Tanzanians to take all the required precautions against Covid-19 including wearing face masks. This is the first time that the ministry seems to concede that the Covid-19 pandemic does exist.
The statement issued on Sunday, February 21, 2021 by the Head of the Public Relations Unit, Gerard Chami mentioned other precautions including hand washing, use of sanitizer, exercising, and protection for all those at risk such as the elderly, obese people, and those with chronic illnesses.
The statement also urged Tanzanians to get proper nutrition including fruits and vegetables, use natural remedies registered by the council of traditional healers and as advised by relevant professionals and visit health facilities as soon as you see symptoms of illness so that caregivers can have a better chance of treating.