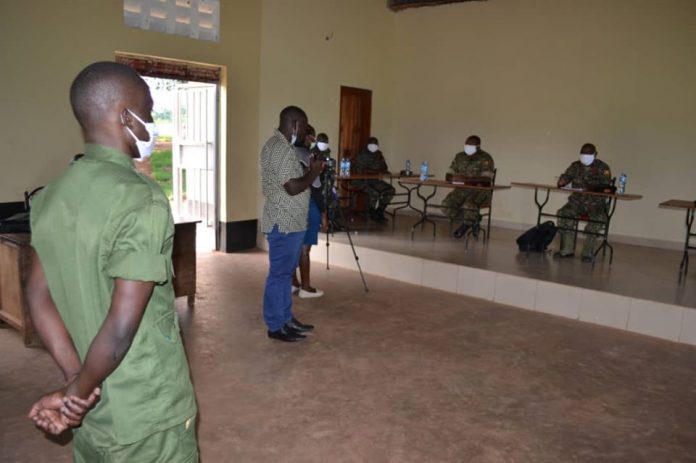 The Division Court martial, of the UPDF 1 infantry Division, on Tuesday charged 8 UPDF and LDU personnel of different offences.
The 7 member court, under the chairmanship of Col. Sam Mugyenyi, heard cases that ranged from man slaughter, careless shooting while in operation, failure to protect war materials all deemed capital offences by the UPDF Act.

The Defence lawyer, prayed for a lenient sentence since Kiringi was a first offender, did not waste court’s time and was remorseful of his act.

On his part, the convict pleaded that he had a pregnant wife and was the sole bread winner for the family.
He pleaded for a lenient sentence. In consideration of the above, court sentenced him to 6 months’ detention starting from the day of conviction.
LDU AX 015479 Ntabakirapose John, was charged with desertion, a capital offence under the section 146 of UPDF Act of 2005. He denied charges and was remanded until the 26th May 2020.


Similarly, RA/221596, Pte. Bogere Kigoma Pius, was also charged under the same section. He accepted the charges.
State prosecutor, Capt Pigan Mugisha pleaded to court that the convict be given a deterrent sentence. On his part, the defence council Mrs. Kensiime Merian mitigated that Bogere was a first offender, he did not desert with a weapon and was the sole bread winner for the family. She therefore, pleaded for a lenient sentence. After a careful and lengthy deliberation, with consideration of mitigating factors, court sentenced him to 15 months’ detention from the date of his arrest.
Others charged were, RA/204330 Pte. Kabwana Jimmy, for careless shooting in operation against Section 125 of the UPDF Act. While LDU AX 016343 Olingi Joseph, was charged with obtaining registration by false pretense under Section 312 of the penal cord Act. He denied the charges and was remanded until 26th May 2020.


Of recent the Division Court Martial, sits regulary to hear both service and nonservice offences.
According to the 1Division Commander Maj Gen. Samuel Kawagga, the court sittings are part of the deliberate efforts to ensure discipline in the force. “We continue to use all means at our disposal to ensure that we maintain our norms, traditions and culture that have always defined us”.
He maintained that, they will ensure professionalism and discipline through continuous training, mentoring and taking administrative action in addition to legal action to maintain a disciplined force.