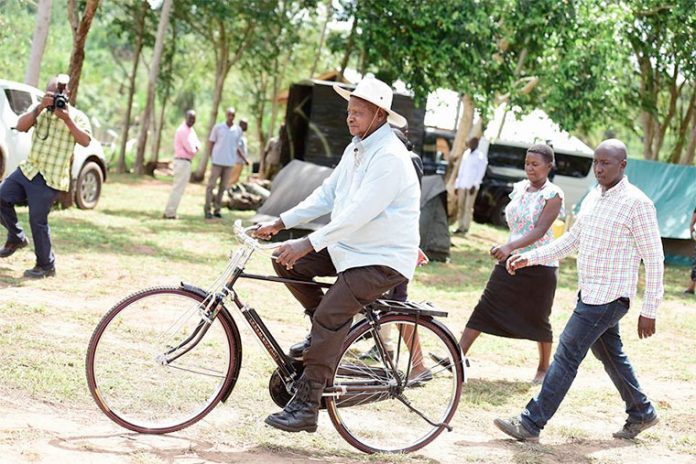 President Museveni his 4th address to the nation about the coronavirus epidemic, at State House Nakasero on Tuesday warned traders trying to take advantage of the current situation.
The prices of essential goods like salt, sugar, rice, posho has more than doubled in the past few days. For example, 500gm packet of salt which has been selling at Ugx 700, is now selling at between 3,000 and 4000. While A kilo of sugar now goes for Ugx. 7000 up from 3600.


Describing such traders as crooks, the president said he would deploy his intelligence teams to trace merchants who have hiked commodity prices.
“I hear there are crooks hiking the prices of food. I will send my spies to the market and if I find anybody hiking the prices, I will cancel their licences,” he said.

Mr Museveni said: “Nothing has changed for you to overcharge. We produce food here. If you hike the prices of food, I may have to mobilise NRM cadres to go to villages and bring food here; and they leave these crooks of Kampala,” he said.
President also said that he is seriously considering suspending public transportation as another measure of preventing the spread of Covid19. Uganda on Monday registered eight more cases. All of who travelled from Dubai on March 20th and 22nd.


The head of state said is happy that doctors have managed to treat the first person who tested positive for coronavirus.
The President, however, said he’s still worried about public transport as far as fighting the disease is concerned.
“I am monitoring the situation, let us see these people who left the airport and how the problem will grow to consider suspending public transport,” he said.


He said if Uganda had enough bicycles, he would have suspended public transport in towns.
He also said that suspect Covid-19 patients who are trying to hide are endangering themselves and others, because the disease is not like Ebola and can be treated.