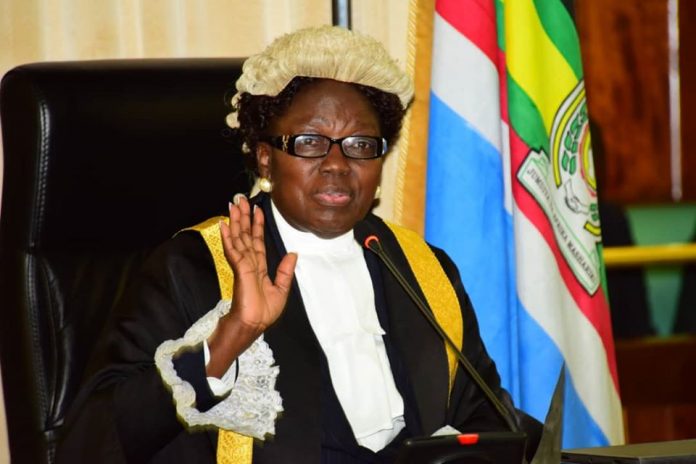 Chief Justice on Thursday also suspended all court hearings and appearances for at least 32 days with effect from March 20 in attempt to prevent the spread of coronavirus.


During this time, prisoners and remandees will not be presented to court but where possible, proceedings may be conducted using video link, according to the Chief justice.
“For cases at the stage of submissions, the respective courts may advise the counsel/parties to file written submissions,” he said in a statement issued on Thursday.

“All execution proceedings are hereby suspended for the same period of time except where attachment has already taken place. Courts will continue to handle certificates of urgency and taking plea for seruious cases and bail applications. Only the applicant and his/her lawyer, or in the case of bail application, the sureties will be allowed in court,” Justice Katureebe added.


The Chief Justice directive, is in line with the March 17 directive issued by President Museveni
President Yoweri Museveni on Wednesday came out with 13 measures including shutting of schools, churches, mosques and all places of worship, political and cultural gatherings and others for 32 days
As of Thursday evening, over 227,677 cases Coronavirus were registered from just over 198,000 cases the previous day. Fatality has meanwhile increased from 9% to 10% standing at 9,303 on Thursday against the recovered figure of 85,971.


Meanwhile, the Speaker of Parliament Hon. Rebecca Kadaga told MPs on Thursday that the Chambers are going to be vacated for weeks or even months.
“Members since people are not supposed to be near each other, we shall move to the Conference Hall to protect ourselves from Coronavirus. Clerk is directed to make the arrangements,” Kadaga told MPs
Plenary business is from next week going to be conducted from the Conference Hall, which is ordinarily accessed by everyone in the building.


Kadaga issues new guidelines
In communication to Parliament today, the speaker issued new guidelines for Members of Parliament, Staff and the public to take note to minimize spread of Coronavirus:


4. There shall be temperature guns stationed at all floors of Parliament.
5. More sanitisers shall be provided in all entrances and offices at Parliament
6. Effective Friday, 20 March 2020, all Interns, Personal Assistants, Staff of the various Parliamentary Fora, are suspended. This shall stay in force for 30 days.


7. Parliament is considering vacating the current Chamber and use the Conference Hall, which is more spacious, for debates.
8. The Parliament canteen will strictly be accessed by MPs and staff.


9. There will be no personal visitors coming to Parliament.
10. Parliament will scale down on none critical staff who will be advised to work from home.