Home Politics CJ Bart Katureebe; at best, you are aiding and abetting dictatorship 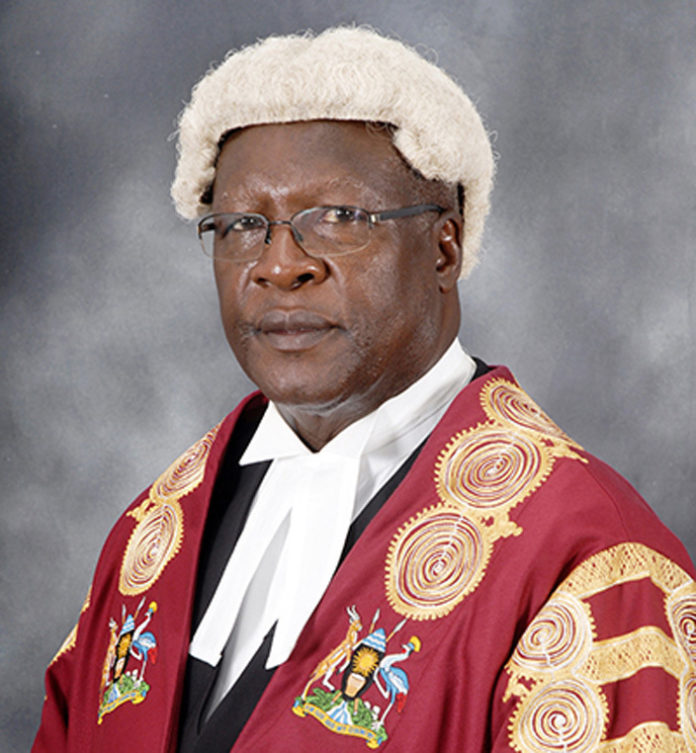 Dear Chief Justice Bart Katureebe, I urgently draw your attention to the vagary and misfortune that the other two arms of government led by – President Museveni and the Speaker of Parliament Rebecca Kadaga, visited upon us Ugandans, while you remain conspicuously silent, worryingly indifferent and seemingly aloof.


In any case, we have as a society deteriorated so badly that there isn’t much difference between a professor, witchdoctor, bishop, businessman, sex worker, sheikh, judge, boda boda cyclist, medical doctor, minister, casual labourer, parliamentarian, engineer, fraudster or lawyer—we have all been reduced into one powerless, directionless and meaningless lot.


It is impossible to purport or pretend that you are His Lordship the Honourable Chief Justice of Uganda in the present state-of-affairs I am going to elucidate below.
Nothing, not even that glistening official five litre engine S-Class Mercedes, top-of-the-range VX Landcruiser or that noisy and menacing escort party of mean-looking counterterrorism police officers who push us off the road with wailing sirens and spinning lights as you’re speeding to work can confer the deference that is due to the office you hold; you’ve got to do more, assert yourself more and participate in efforts to rescue Ugandans from this monarchy, sua sponte or suo motu.

The ethnic oligarchy he leads under the guise of a government has for long been a law unto themselves. As despicable and regrettable as his decades-long assault on institutions, laws and Ugandans has been, his conduct is in many ways expected.
His track record has no trace of democratic ethos; it has been deceit, treachery and violence from day one.
Museveni has never honoured any agreement throughout his known political career—

On the other hand, under the duplicitous and spineless Rebecca Kadaga, the so-called Parliament has been the scene of several crimes against Ugandans and the Constitution—including but not limited to laws like the draconian Public Order Management Act, the insidious Computer Misuse Act, and the misogynist Anti Pornography Act.
With incredulous alacrity and shameless aplomb, Rebecca Kadaga has exhibited a spirited commitment to guillotining the Constitution, thereby abetting the NRA’s armed robbery of our citizenship, reducing us into squatters in our own country.
The most outstanding and current example of Kadaga’s place and role in this assault against Ugandans was exhibited last month when she run roughshod over all the legal and technical objections—some founded in elementary constitutional law principles— and offered Parliament to be the midwife for the Life Presidency.


Kadaga, long the iconoclast of women emancipation and leadership, alongside beacons like Winnie Byanyima, Cecilia Ogwal, Miria Matembe, Lydia Mugambe-Ssali, Sylvia Tamale and Irene Ovonji-Odida, committed (political) suicide and cannot under any circumstances resurrect her political career after holding down the Constitution and abetting its violent gang rape by 317 rapists on the night of 20 December, 2017, along Parliamentary Avenue.
What the foregoing paragraphs mean, Mr. Katureebe, is that the Executive as well as Parliament are captive and have long gone rogue because they are being led by (President Museveni and Speaker Kadaga respectively) who can no longer discharge the responsibilities that come with two of the highest offices in the land with requisite impartiality, judiciousness and sobriety.


Ugandans are on their own

Land is grabbed with impunity by armed bandits highly connected. Elderly pensioners have to beg for what is due to them. Foreign (and domestic) employers mistreat Ugandans with the state’s acquiescence and tacit approval.
UMEME, MTN, Chinese outfits and other multinationals are bleeding this economy white while the regulatory agencies (ERA, UCC and URA) are snugly in bed with those they are supposed to regulate and oversee. The examples are innumerable.
The judicial arm that you lead isn’t innocent either but it has enjoyed a modicum of the public’s confidence and retains some respectability—which is nonetheless fast waning.


The multiple desecrations of Courts by state-sponsored militia which has lately been evident in the now routine re-arrests of suspects who have been granted bail (in broad daylight!) and the Hon. Kadaga-sponsored mob that surrounded a courthouse a few days ago, or the Kayihura-sponsored goons who besieged court in Makindye in 2016, the complicity of the Director of Public Prosecutions in proffering politically-motivated charges against those who hold alternative or dissenting views, the chronic under-funding and disdain that the Justice Law and Order Sector faces as exhibited in the recent industrial action by prosecutors which was largely ignored by government, to mention a few, are indicative of the depths our country has sank under your watch and leadership—or lack thereof.


You cannot purport or pretend to be a Chief Justice under these circumstances. At best, you are aiding and abetting this dictatorship.
There is nothing left to remove from our Constitution. The 1995 Consensus has aborted. The infamous repeal in 2005 of the presidential two-term limit from the Constitution can be compared to the removal of the hind-brakes of a bicycle.
Now, the front-brakes (presidential age-limit) have also been removed and, as Bernard Tabaire rightly observed, we are being stampeded downhill, in a race to the bottom. Dance Macabre!


As such, you, Mr. Katureebe have two options: either you step down, close shop and let the full weight of Museveni’s family rule be visited on us or you rise to the occasion, step up and provide leadership and defend the judicial branch because ultimately, “we must, indeed, all hang together, or most assuredly we shall all hang separately,” as famously noted by Benjamin Franklin centuries ago.
I have no illusions about how tough it must be to do your job in the prevailing state-of-affairs and so for your benefit.

Finally, make no mistake, ‘Uncle’ Bart: your silence cannot save you from the brutality that was visited on a onetime occupant of that very office you are sitting in, Benedicto Kiwanuka. The people who committed those savage acts are still around. Do you remember the security incident at your residence when a man accosted you with an iron bar during the Amama Mbabazi petition? That was a warning from the same people who killed Chief Justice Kiwanuka.
Use your office and save whatever is left of the Constitution before it is too weak to rescue you.