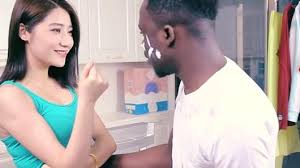 A Chinese laundry detergent marker Shangahi Leishang Cosmetics Limited has apologized for the harm her advert caused to African population.

In the advert that went viral: A black man wearing dirty clothes, with a soiled face enters a room with a beautiful Asian woman doing her laundry. The two look at each other suggestively. However, the woman first feeds the visitor with a detergent drop of Qiaobi and stuffs him in a washing machine.

After a few minutes later, a fair skinned Asian man in a clean white T-Shirt emerges to the delight of the waiting would be Girl friend.

The advert went viral causing protests especially from the black population. The company has since withdrawn the advert and also apologized for the harm the advert may have caused.

‘ ‘ We express regret that the advert should have caused a controversy. But we will not shun responsibility for controversial content’’ read part of the statement from Shanghai Leishang Cosmetics Limited.

‘We express our apology for the harm caused to the African people because of the spread of the advert and the over-amplification by the media. We sincerely hope the public and media will not over read it.’’

The company has since pulled down the link to the advert, calling on the population to stop sharing it.