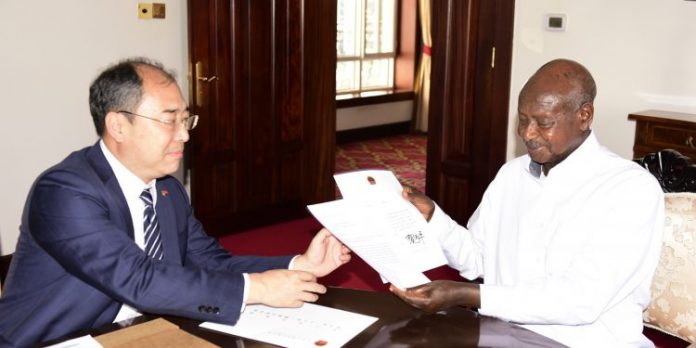 
President Museveni on Sunday turned 75. The president spent the day at his farm in Kisozi grazing his cattle. Mr. Museveni settled for September 15 as his birthday, after speculation and second-person accounts supported by what he calls a number of “historical and scientific” events that took place in 1944, the year when he says he was born

“On the occasion of your birthday, I have the pleasure to extend to you my sincere congratulations and best wishes,” the message dated 15th September written in Chinese and English reads in part.
‘ ‘ I wish to work with you, talking the implementation of the outcome of the Beijing Summit of the forum on China-Africa cooperation as an opportunity to further promote the comprehensive cooperative partnership of our two countries to new heights so as to benefit our two countries and people’’


The message was delivered by Chinese Ambassador to Uganda Mr. Zheng Zhu Qiang during a meeting with the President at Entebbe State House
“During your working visit to China last June, we held cordial and friendly talks and jointly elevated the positioning of our bilateral relations. I attached great importance to the development of China-Uganda relations. I wish to work with you, taking the implementation of the outcomes of the Beijing Summit of the Forum on China-Africa Cooperation (FOCAC) as an opportunity, to further promote the Comprehensive Cooperative Partnership of our two countries to a new height so as to benefit our two countries and peoples. I wish you good health and every success,” read the message.


President Museveni said that he was very happy with his recent visit to China during which he and other African Heads of State and Government attended the Forum on China-Africa Cooperation Summit in Beijing saying, he learned more about China’s policies in the ways of articulating its development, role and involvement in global economics.


Ambassador Zhu Qiang said that his country has learnt a lot from President Museveni’s well-researched speeches that have gone a long way in helping China understand and appreciate sustainable economic cooperation and development between Uganda and China in particular and the African continent in general.
The Ambassador observed that after President Museveni’s latest visit to China, the two governments have moved to implement collaborative agreements including the availing of US$300 million by the government of China to support Uganda on a number of regional issues.