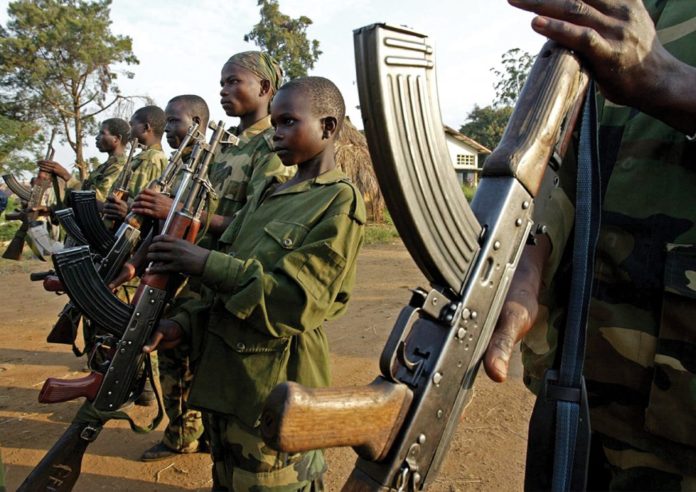 The majority of children who join armed groups in Democratic Republic of Congo increasingly do so “voluntarily” because of a lack of alternatives, international charity War Child said Tuesday.
There has been a steady drop in the number of child soldiers forcefully recruited by guerrilla groups since the 2012 departure of notorious rebel leader Joseph Kony, the organisation said in a study presented in Kinshasa.


“The recruitment of children, even if not forced, nonetheless appears to arise less out of a desire (to join) than a choice made within a limited set of socio-economic options,” said War Child, which supports and protects children around the world affected by conflict.
The “voluntary” adherence to armed rebellion is “a last resort” for children, particularly in the North and South Kivu provinces where dozens of militia groups are fighting for control.

Poverty, unemployment, hunger, and violence are some of the main issues driving children to join militia groups in those regions, the study said.
War Child noted that DR Congo’s military had “improved” its fight against rebel groups in recent years.
Last year, the UN removed the country’s army from its annual blacklist of national militaries recruiting child soldiers.


But it also warned that the number of child soldiers recruited “by armed groups and militia is on the rise again” due to a recent flare up in regional conflicts, filling the void left by Kony.
For three decades, the self-styled prophet and his Lord’s Resistance Army (LRA) has cut a swathe of murder, mutilation, rape and abduction across central Africa.


The LRA has slaughtered more than 100,000 people and kidnapped 60,000 children since it was established by Kony in northern Uganda in 1987, according to the United Nations.
Wanted on war crimes charges, Kony fled from Uganda to DR Congo more than 10 years ago, before heading to the Central African Republic in late 2012.
///AFP