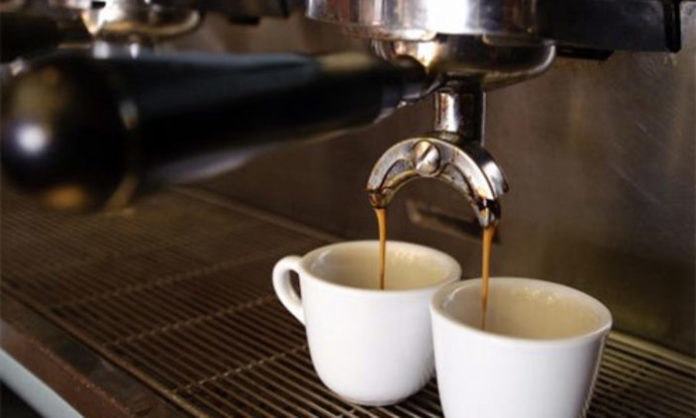 Most pregnant women know to avoid certain foods and drinks, such as raw meat and alcohol. But a new study lends weight to the notion that a high intake of caffeinated substances may also be detrimental to a baby’s health.
The study, published Monday in the journal BMJ Open, found that excessive caffeine intake during pregnancy was linked to excess growth during the infant’s first year of life and an increased risk of the child being overweight eight years later — both of which are associated with an increased risk of obesity later in life, according to Eleni Papadopoulou, researcher at the Norwegian Institute of Public Health and a lead author on the study.


“We considered it very important to study the effects [of caffeine] on infant growth, because rapid infant growth has been very consistently related to the development of obesity in childhood and even in adulthood,” Papadopoulou wrote in an email. “In other words, children and adults who are gaining more weight during infancy than their peers are at higher risk to be overweight or obese.”
The study looked at over 50,000 women from across Norway who were recruited to take part in the Norwegian Mother and Child Cohort Study between 1999 and 2008. The women’s caffeine intake was reported once during pregnancy — at 22 weeks — and the children’s growth patterns were tracked from 6 weeks to 8 years of age.
Based on self-reported dietary data, caffeine intake was characterized as low (0-49 milligrams/day), average (50-199 mg/day), high (200-299 mg/day) or very high (300 or more mg/day). Potential sources of caffeine included coffee, black tea, caffeinated soft/energy drinks, chocolate, chocolate milk and some types of sweets.

For reference, an 8-ounce cup of caffeinated coffee typically has between 100 and 150 milligrams of caffeine, and an 8-ounce cup of black tea or cola has between 25 and 50 milligrams of caffeine, according to the Mayo Clinic.
“It is important that pregnant women be aware that caffeine does not come from coffee only but that caffeinated soda drinks can also contribute with considerable amounts of caffeine,” Papadopoulou wrote. “The current recommendation for pregnant women is not to exceed 200 mg of caffeine intake per day, which is approximately 2-3 cups of black coffee. This recommendation is based on all the scientific evidence of the adverse effects of caffeine on pregnancy outcomes such as miscarriage and fetal growth restriction.”
The researchers found that women who had a very high intake of caffeine during pregnancy had a 66% heightened risk of having a child with excess growth during the first year of life compared with women who had a low intake of caffeine. “Excess growth” was defined as having a weight-for-age score greater than the 75th percentile for that age.


Women who had an average or high level of caffeine intake also had a 10% and 30% heightened risk, respectively, of having children with excess growth during infancy compared with those with a low intake of caffeine, according to the study.
“This is an important finding, given that about 75% of women drink coffee during pregnancy and also because of our obesity problem,” said Dr. De-Kun Li, a reproductive and perinatal epidemiologist in the Division of Research at Kaiser Permanente Northern California, who was not involved in the most recent study.
“For childhood obesity, there are many risk factors that happen during pregnancy,” Li added.
In addition to excess growth during infancy, the study looked at whether children exposed to very high levels of caffeine during pregnancy were more likely to become overweight during childhood. It found that exposure to average, high and very high levels of caffeine in utero was associated with significantly higher risks of being overweight at 3 years and 5 years of age.


“Our findings show that high maternal caffeine intake during pregnancy was related to excess growth from infancy and with obesity later in childhood. The results support the current recommendations to limit caffeine intake during pregnancy to less than 200 mg of caffeine per day, which is approximately 2-3 cups of coffee … (but) we also found associations with caffeine intake below 200 mg,” Papadopoulou said.
But at 8 years of age, only those children who had been exposed to very high levels of caffeine were still found to have an increased risk of being overweight. Specifically, these children weighed, on average, 213 grams (7.5 ounces) more at 3 years, 320 grams (11.3 ounces) more at 5 years and 480 grams (16.9 ounces) more at 8 years than those children exposed to low levels of caffeine.
“Once you get to around 10 years old, all the other factors come in to determine obesity, particularly diet and exercise,” Li said. “Sedentary behavior like games, computers and watching TV all come into play and can overwhelm the internal mechanism due to caffeine intake during pregnancy.”


This is not the first time caffeine intake during pregnancy has been associated with adverse health outcomes in children. A 2008 study showed that women who consumed more than 200 milligrams of caffeine per day were more than twice as likely to have a miscarriage than those with no caffeine intake.
A 2015 study reported that exposure to caffeine in utero was associated with an 87% increased risk of childhood obesity.
But the new study is the first to look at the effects of caffeine at levels as low as 50 milligrams per day. It is also one of the first to look at growth rates during the first year of life, according to Papadopoulou.
“Our findings on caffeine intake and rapid growth in infancy are novel,” she said. “The finding that caffeine intake in the range of the recommendations were associated with excess infant growth … were also a bit surprising.”
The mechanism linking caffeine exposure with increased childhood growth is still not entirely clear. Caffeine is known to cross the placenta and has been associated with decreased growth of the fetus during pregnancy, otherwise known as “intrauterine growth restriction,” according to a 2001 study.


According to Li, caffeine might affect the development of the hypothalamus-pituitary axis in the brain that is responsible for regulating many of the hormones responsible for childhood growth and development, resulting in decreased growth in utero and increased growth after birth.
“We know that caffeine impacts the baby’s brain functions … so the hypothesis is very plausible,” Li said. “We know that caffeine affects the neurotransmitters that affect the brain, and we know that anything that happens during the fetal period will be amplified and could be long-lasting.”
In 2010, the American College of Obstetricians and Gynecologists reported that consuming less than 200 milligrams of caffeine per day while pregnant is not associated with adverse health effects and that evidence linking consumption of more than 200 milligrams of caffeine per day with decreased fetal growth is inconclusive.


But not everyone agrees with the organization’s current stance.
“I didn’t like that idea,” Li said. “I think the idea should be drink as little (caffeine) as possible. Do your best. And if you can’t, then you absolutely should not go over 200 milligrams.”
The new study was based on self-reported data from a racially and ethnically homogenous population — one of the study’s main limitations, according to Li.
It also did not control for breastfeeding, which is known to affect growth rates during infancy, according to Tom Sanders, professor of nutrition and dietetics at King’s College London, who was not involved in the study.
But the results still add more to the argument that increased caffeine intake in pregnancy could have long-term negative consequences for the baby’s health, according to Papadopoulou.


“Our findings support the current recommendation, as caffeine intakes higher than 200 mg/day was most consistently associated with (excess) child growth,” she said. “However, our study also adds to the growing body of evidence indicating that complete avoidance of caffeine during pregnancy might be advisable.”
Source: CNN