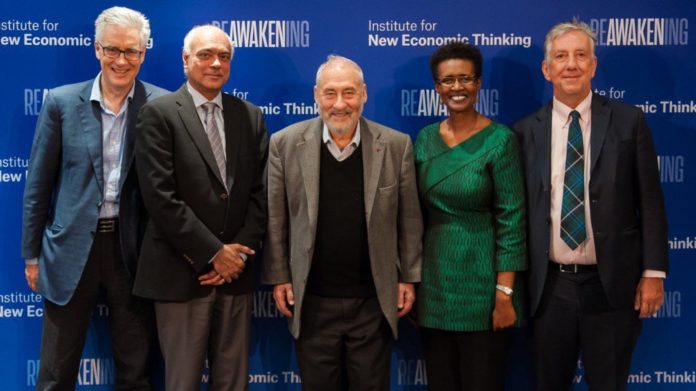 Oxfam International Executive Director Winnie Byanyima has been appointed to a new “Commission on Global Economic Transformation” led by Nobel Prize-winning economists Joseph Stiglitz and Michael Spence. It has been initiated by the Institute for New Economic Thinking (INET).


As an independent entity, the Commission on Global Economic Transformation (CGET) is the first of its kind, starting at a critical moment for the global economy.
The CGET will commission new and synthesize existing research and convene international working sessions in China, India and other locations. This will result in a final report in 2019. Reflecting the consensus view of the Commissioners, the report will include an examination of problems and emerging crises in the world economy and apply the conclusions reached at CGET meetings to make bold policy challenges in specific countries and regions of the world.

The Commission will tackle issues from macroeconomic balances to rethinking globalization, and from climate change to technology and the future of work.
As political and economic populism sweep across the developed world, developing countries are searching for paths to prosperity, and people around the world are struggling with the challenges posed by widening inequality, technological disruption, and climate change.
These problems are being compounded by ineffective current policy tools in many contexts, raising questions about the role of the state, of civil society, and of individuals along with national and international governance frameworks. The Commission is responding to the need for new thinking and new rules for the global economy.


“Nothing short of a ‘Global Economic Transformation’ is needed to urgently reverse a long-term global inequality crisis and build a more human economy that benefits everyone, not the privileged few.’’ Winnie Byanyima, Executive Director of Oxfam International said.
She added: It is my honor to join this esteemed Commission on behalf of Oxfam and to amplify the voices of those people we work with facing poverty – most of all women across the South.
Ms Byanyima says we must advance the ideas that lead to fairer societies where work is dignified, taxation is fair, businesses work in the interests of workers and producers, and governments are truly accountable to their people.