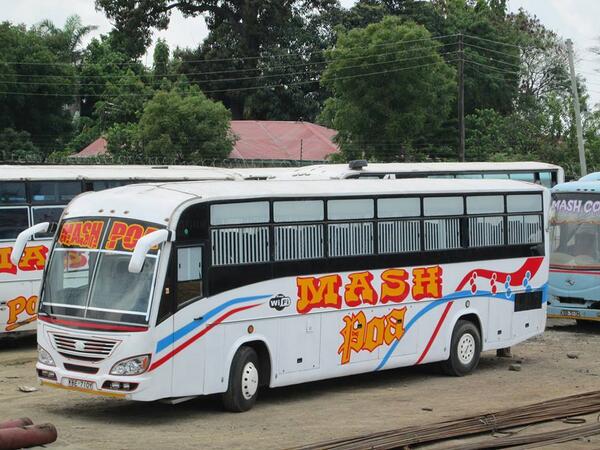 Some bus companies plying Kampala-Nairobi route have announced plans to temporarily stop their operations on Saturday ahead Kenya general elections slated for August 8th 2017.
Alex Mujomba the Currier Manager at Mash Bus Services in Kampala says they are not going to risk their buses to operate during the election period.


The company boasts of more than 40 air-conditioned, well-serviced state of the art buses with Plasma Screens.
He says currently they are overwhelmed because the number of passengers traveling from Kampala to Nairobi and those coming out of Nairobi has increased tremendously over the past one week.
Meanwhile, in Kenya, passengers jostled with ticket touts and hawkers at Kenya’s main bus stations on Thursday as thousands started leaving cities before next week’s vote, some because they are registered in rural wards, others because they are scared of violence.

Jitters over the Aug. 8 polls, which come a decade since 1,200 people were killed in ethnic unrest after a disputed election, intensified this week with the torture and murder of a senior election commission official.

Voters in the East African nation of 49 million will pick a president, members of parliament and regional authorities. President Uhuru Kenyatta, who is facing off against long-time rival Raila Odinga, was charged by the International Criminal Court with orchestrating the 2007 unrest, but the case against him and his current deputy, William Ruto, collapsed.


Odinga ratcheted up the rhetoric a notch this week, telling Reuters at a campaign rally near Nairobi that the only way for Kenyatta to win was by rigging the poll.
Kenyatta hit back with a challenge to Odinga to present the evidence.

“The electoral commission has told us that they have put in place all the necessary arrangements to ensure there will be no rigging, but he keeps insisting so maybe he should tell us how,” Kenyatta told Reuters at a campaign rally east of Nairobi.


Spread of Fear
The government acknowledged that many were nervous. “There is a lot of spread of fear … which is making some Kenyans choose to leave where they stay to go to their villages where they perceive it is more peaceful,” senior interior ministry official Karanja Kibicho told a news conference.


He said the government was deploying more than 150,000 officers from the police and other agencies including the wildlife service to secure nearly 41,000 polling stations. He asked Kenyans to remain calm. “They need to stay where they are registered as voters, and they need to trust that we shall protect them to actually vote.”