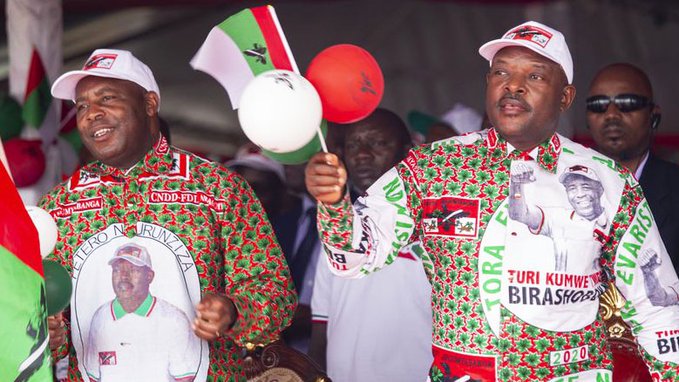 After four days of vote counting and claims of vote theft by the opposition, Burundi’s ruling party candidate has been declared winner of a presidential election held last week.
He secured 68.72% of the vote, while opposition chief Agathon Rwasa got 24.1%. Other five candidates shared 8% of the vote- the electoral commission said on Monday.


speaking journalist after elections,main opposition leader accused the ruling party of “mischief” and said police and security officers were kicking opposition members out of polling places.
“The voting was marred with several irregularities: arrests of over 200 CNL (observers), intimidation, people who voted several times or under the names of dead ones, refugees or prisoners,” said Terence Manirambona, the spokesman for the CNL.
There were few international election monitors on Wednesday after the government said they would have to spend 14 days in quarantine to prevent the spread of the coronavirus.
“We fully reject and protest these results because we know very well our party won,” Aime Magera, a representative of Rwasa’s CNL party told The Associated Press. Magera claimed his party won with 57% of the vote.

“We will go to court to challenge this,” Magera said.

Some observers worry that disputed results could lead to the kind of violence that marked the previous vote in 2015.


Evariste Ndayishimiye, a retired general, will take over from President Pierre Nkurunziza, after he beat the main opposition candidate Agathon Rwasa, and five others.
The total registered voters in a country of 11 million people was 5.1 million, meaning voter participation stood at 87%.

President Pierre Nkurunziza, who has led Burundi since 2005, is widely expected to maintain a lot of influence.

Outgoing leader Nkurunziza surprised many when he agreed to step down last year. Early this year parliament agreed to award him with $530,000 and a luxury villa as well as his honorary title.