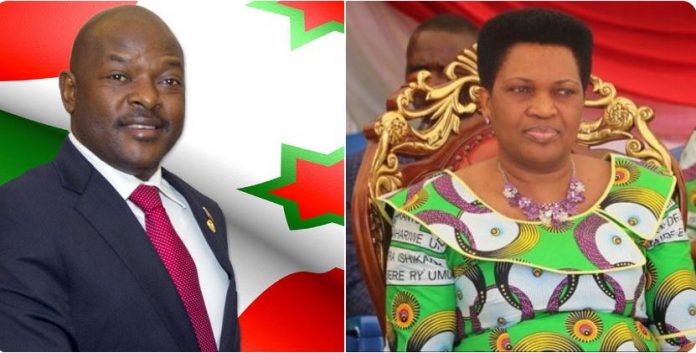 Denise Bucumi Nkurunziza, Burundi’s First Lady is currently admitted at The Aga Khan University Hospital, Nairobi after she reportedly contracted the novel Coronavirus. She was flown in on a late-night medical flight
Sources indicate that Mrs. Nkurunziza, was airlifted to Kenya’s Capital from Bujumbura on Thursday morning on a Pilatus plane, by AMREF air ambulance service, according to a source at the Melchior Airport in Bujumbura.
Her condition remains unknown.


“The plane took off from Bujumbura Airport on Thursday night with airport lights turned off as staff and security were asked to clear before her arrival,” the source indicated.
Outgoing President, and husband Pierre Nkurunziza was not in the flight and she was accompanied by three bodyguards one who has also tested positive.
President Pierre Nkurunziza, a devout evangelical Christian, and his wife Denise, who is a pastor, have regularly played down the seriousness of the pandemic in their speeches and sermons.

Burundi has so far recorded 42 cases of Coronavirus and one death.
President Nkurunzinza has dismissed the virus just like his Tanzanian counterpart John Magufuli telling Burundians to live their normal lives.
Two weeks ago Burundi ordered the country’s top World Health Organization (WHO) representative and three other experts coordinating the novel coronavirus response to leave the country.


The country also recently held their presidential elections which saw the governing party candidate, retired General Evariste Ndayishimiye, win with 69 percent of the vote.
On Thursday, during national prayers to thank God for the ruling party’s victory in the election, Nkurunziza repeated claims that Burundi was saved from the virus due to “the hand of God”.


“If all over the world we talk about the coronavirus pandemic, but we were able to gather without any problem, hold an electoral campaign without any problem, send our children to school and go to the market without worries …. it is the hand of God which shows he has placed a special sign above our Burundi,” he said.
“Look here, is anyone wearing a mask?” he asked the packed crowd.