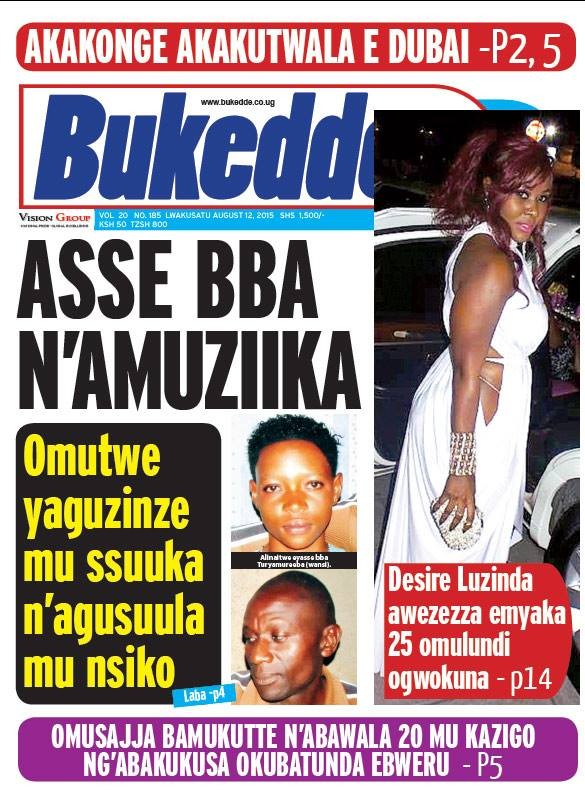 Market reports indicate the Paper’s total circulation has declined from an average of 40,000 copies in April 2015 to the current average of 28,000 copies.

Figures from the latest Audit Bureau of Circulation (ABC) reports (Q3 2015) show that the Luganda leading daily sales 28,136 copies. The same report reveals that total circulation has declined from 39,853 copies to current 29, 058 copies–a 10,795 drop in copies. The current market reports show, the paper’s circulation has since dropped to an average of 28,000 copies. The ABC Q1 2016 expected soon, and will show this.

According to industry experts, Bukedde is likely to return to its original position (copy sales) when it was selling at Ugx. 500.

In June 2015, taken by growing copy sales and popularity of Bukedde Newspaper, the New Vision Group management took a bold decision to increase the cover price of Bukedde from Ugx. 1000 to Ugx 1,500.

What followed is the unfortunate fall in copy sales. In the first month, after the price increase, the paper lost 7,000 copies. This has since jumped to more 10,000 copies. Bukedde target market-low end and people in the informal sector are said to be price sensitive. An increase of Ugx. 500 mean a lot to them.

It should be noted that to a typical Ugandan, a newspaper is not a priority. It’s little wonder, Ugandan newspapers have the lowest copy sales in the region-See table below. However, they are the among top consumers of alcohol globally.

The emergence of cheap smart phones from China fitted with radio has given Ugandans cheaper alternatives of news. The relatively cheaper internet fees have only worsened the situation. For example, with Airtel Internet, you get 100mb’s for just Ugx. 1000. it is little wonder Bukedde website is one of the most visited websites in Uganda.

With price increase some readers with smart phones switched to reading their favourite paper-Bukedde online free as they enjoy other benefits of their internet including, sports gambling, entertainment and perhaps making free WhatsApp calls.

A 2014 Ipsos research reveals that the number of Ugandans who accessed information from Newspapers dropped from 35 percent in 2011 to 22 percent in 2013-representing a 12 percent drop. This number has since fallen farther with cheaper internet bundles.

Bukedde growth over the years was attributed to parenthood from simple paper-The New Vision. Bukedde built a strong brand on social affairs news and mastery of public tastes and preferences. The paper also benefited from foreign warfare by coping and publishing internet photo’s of rare military weapons by warring sides.

Unfortunately, all this has been taken on by new entrant and rival-Kamunye-A vernacular Luganda newspaper printed by Red Pepper Publication. The Red Pepper is an English tabloid newspaper. A few months ago, Kamunye poached one of Bukedde senior editors, who has taken all Bukedde style of reporting to Kamunye including the popular one word banner headline.

also read: How Tony Glencross is reviving Daily Monitor, Can he succeed where others have failed?

Since then, Kamunye copy sales have jumped from low 4000 copies to about 9,000 copies currently. Unlike Bukedde, Kamunye writes sensational news, which tends to attract their target market. Kamunye sells at Ugx 1,500.

Bukedde is a government-owned Newspaper. Thus, there is no way it can avoid writing about politics (especially in favour of government) but this has come at a cost, drop in copy sales. An analysis of copy sales reveals each time the paper writes politics, especially as the lead story (most Ugandans buy papers depending on the day’s lead story) the sales drop. Newspaper in Uganda are funny, lost copies are never recovered. The observer Newspaper is true testimony of this. Circulation and sales of The Observer have dropped from high 20,000 and 18000 respectively in 2009 to current 6,000 and 3200 respectively.

The Management has tried a number of initiatives to propel Bukedde sales without much success-one such was ‘‘ Bukedde Tugende e Dubai ‘’ promotion. This promotion can best be described as one of the worst the New Vision has carried out in the recent past. The timing was bad and the response was indeed very low.

Whether is it complacent by Bukedde management or just more Ugandans are using their internet enabled phones to read news online, Bukedde senior command team must come up with the right strategy to regain the lost glory. With Robert Kabushenga in the driving seat, Kulubya(Bukedde editor) in the co-drivers seat and the entire creative and marketing team lead by Susan Nsibirwa, we can only expect a turn around sooner than later.

In our next article, do not miss full analysis of all magazines in Uganda.