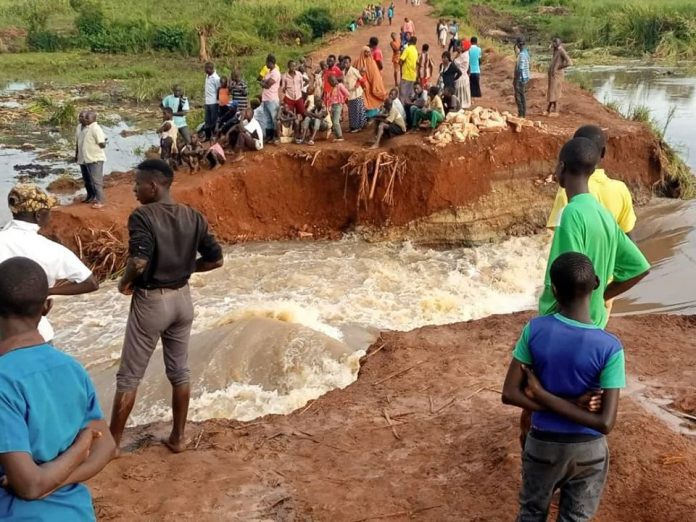 Heavy rains have demolished homes, destroyed crops and swept away roads
In eastern Uganda, following heavy rain that lasted 24 hours, River Manafwa burst its banks. in the fresh mudslides that hit Bududa District on Tuesday, The mudslides affected the villages of Namasa and Naposhi, all in Bushika Sub County.


According to Uganda Red Cross, people at risk downstream are close to 200 households.
Red Cross Volunteers are mobilizing people to move upstream as water has started entering some houses. The assessment team in the field

The body of a man has been recovered,1 boy (about 8 years) has been referred to Bududa hospital after being rescued from the debris.
Search and rescue continues. Last year, more than 850 people were displaced and other 51 died, when mudslides hit Bukalasi and Buwali sub-counties in Bududa district.
Meanwhile news coming from West Nile region, Karuma-Pakwach road has been cut off by flooding due to the heavy rains in the last 24 hours. More than 200 passengers have been left stranded. Other roads like the Pakwach-Paraa Road in Murchison Falls National Park have been flooded.floods were caused by the heavy rains that caused River Nile to burst its banks.
The alternative route to link other parts of Uganda to West Nile is via Panyimur on a ferry


Floods have covered the usually thick vegetation along Pakwach road making it unsafe and un-usable.
Vehicles are stuck on the road, fearing to proceed to far North / West Nile. Travelers to either destinations are advised to take caution


Experts speaks out
Weather experts say the rains have been enhanced by a phenomenon called the Indian Ocean Dipole which, when positive, can cause a rise in water temperatures in the Indian Ocean of up to 2C. This leads to higher evaporation rates off the East African coastline and this water then falls inland.-the BBC reported.


The increased temperature and moisture is brought inland by a reversal of the winds near the equator, strengthening the ITCZ and leading to larger and more widespread storm clouds.
Several regional countries including Kenya are struggling after heavy rains, with more to come.
Djibouti has been called one of the world’s most vulnerable non-island nations in the face of climate change as sea levels rise. Neighbouring Somalia has been hit hard by recent flooding as well.


In Kenya, East Africa’s economic hub, the government said 120 people have been killed in flooding and mudslides during an unusually severe rainy season. More than 60 died over the weekend in West Pokot county.
More than 18,000 people across Kenya are displaced, according to the Kenya Red Cross Society. Infrastructure has been damaged, making aid delivery more difficult.
Doctors are worried that diseases, especially waterborne ones, might spread.


Is there more heavy rain to come?
In the short term, the Horn of Africa is expected to be much wetter as a tropical disturbance moves in from the Indian Ocean.
In December the seasonal rains are expected to continue to move south to affect south-west Kenya, Tanzania, Malawi and northern Zambia.