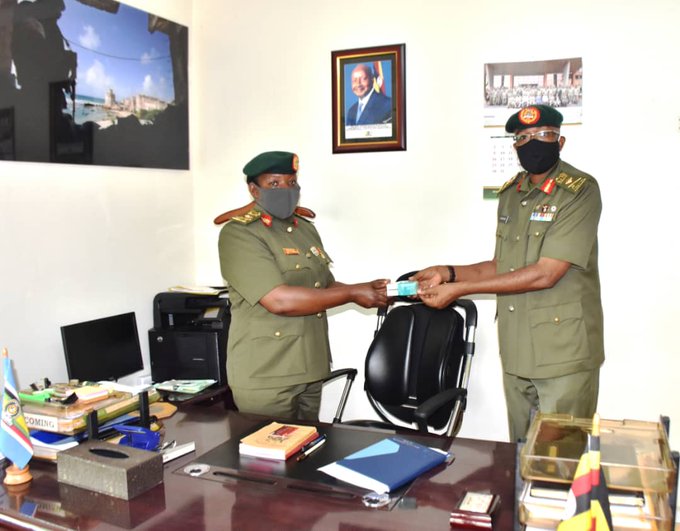 Brig Flavia Byekwaso, on Friday took over office as spokesperson of the Uganda People’s Defense Forces (UPDF).Born on December 29, 1971, Brigadier General Flavia Byekwaso is the first female Uganda People’s Forces (UPDF) officer to be appointed spokesperson.
Brig Byekwaso 39, who has been serving as one of the UPDF Members of Parliament since 2016, takes over from Brig Richard Karemire


Brig Richard Karemire has served since 2017.
At the hand over, Byekwaso praised the outgoing spokesperson for the great work
‘’I have today taken over the office of Defence Spokesperson. My brother Brig Gen Richard Karemire is commended for the great work and the UPDF fraternity wishes him well. I look forward to working closely with you for the common good of our country.’’ she said

She added: The struggle continues.


who is Brig. Gen. Byekwaso

She later joined Makerere University where she attained a Bachelor’s Degree in Business Administration.

In 1997, Byekwaso was recruited as a cadet officer in the UPDF and attained a Military Course at the School of Military Infantry, Jinja.


In 2007, she went for another military training course at the Junior Staff College, Jinja.

The following year, 2012, Byekwaso returned to Makerere University where she attained a Master of Public Administration and Management degree.She is married to Charles Kyasanku, a prominent businessman with a home in Kyengera town along Masaka road.
Byekwaso has served the UPDF in various capacities. Between 2000 and 2004, she served as a protocol officer for the UPDF and in 2006 she was appointed a military assistant.


She later became an administrative officer and director for women affairs.

In 2010, she became a deputy commandant in UPDF and between 2012 and 2013, she served as Principal Logistics Officer before she was elevated to the position of Director of Logistics, where she served between 2014 and 2016.

In the same year, 2016, during the general elections, at the rank of Lieutenant Colonel, Byekwaso was elected Member of Parliament representing the UPDF in the 10th parliament up to date.


She is a member of the committee on public service and local government.

In February 2019 she was among the 2,031 UPDF personnel who were promoted to various ranks.