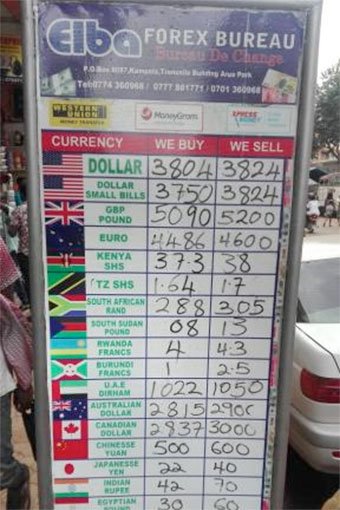 By Stephen Kaboyo
The Uganda shilling continued to post significant losses undermined by strong demand from commercial banks, manufacturing and energy sector.
With very weak inflows, the trend was likely to is throw the market into a panic, as the Central Bank continued to remain on the fence.


Trading was in the range of 3810/3820. This is a new low considering that for the last month it had not breached the Ugx. 3,800 ceiling. The 3,800 mark implies increase in cost of imported essentials like fuel which would in turn push up the cost of transportation and productive activities.
In the interbank money market, overnight funds rate edged up to 6%, while one week remained at 10%.

In the regional currency markets, the Kenya shilling remained firm on account of sizable inflows from offshore investors, although the global rise in oil prices was seen as a major risk going forward.


In the international markets, the US dollar wallowed to a near three week low against the major currencies as US treasury yield fell sharply on the back of receding market appetite.
Global markets were keenly watching the outcome of the Federal Reserve meeting due on 12th June that was widely expected to raise interest rates for the second time this year.

In commodities markets, oil prices were stable with Brent crude futures trading at 77.24 US dollars per barrel.


Forecast for the shilling indicate further weakening on expected demand from importers with global oil price developments being a major factor to watch.
The Central Bank mute action on the sell side was likely to exacerbate anxiety in the market and fuel a speculative attack on the shilling .