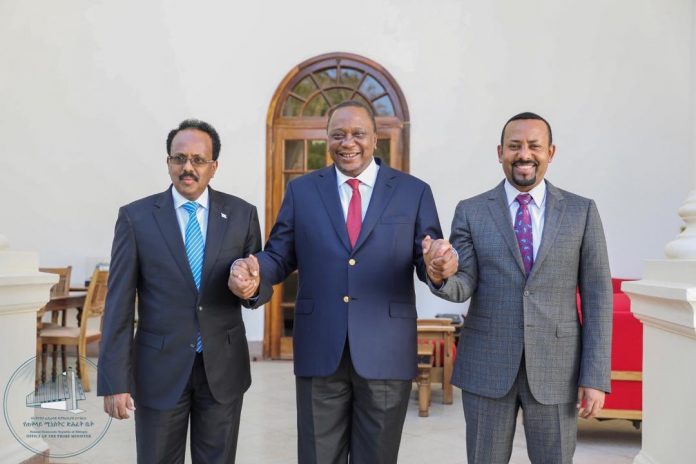 Through the leadership of Ethiopia Prime Minister Abiy Ahmed, Kenya president Uhuru Kenyatta and Somalia president M. Farmaajo met on Wednesday to discuss extensively on the source of the two countries dispute.


As an outcome both agreed to work towards peace and to take measures in addressing particular issues that escalated the tensions.
Dr Abiy arrived in Nairobi Tuesday night accompanied by Somali President Mohamed Abdullahi Farmajo.
“The president’s main objective is to restore and strengthen diplomatic relations with the Republic of Kenya,” President Farmajo’s office said in a tweet.


The maritime border dispute has simmered over time, culminating in Somalia’s filing of a suit at the International Court of Justice in The Hague, Netherlands, in 2014 accusing Kenya of encroaching on its 100,000-square-kilometre marine territory with potential oil and gas deposits in the Indian Ocean. Before then, bilateral negotiations had dragged on for six years without much success.

Kenya insists that the marine boundary is determined by a parallel line of latitude to the east, as per the standards set by the colonial powers, which were adopted in the marine borders between Kenya and Tanzania, Tanzania and Mozambique and Mozambique and South Africa.
On its part, Somalia says the boundary extends to the southeast as an extension of the land border. This would take a large swathe of what Kenya considers its Exclusive Economic Zone.


Somalia’s economy is highly dependent on Kenya’s, while Somalia is a huge market for Kenyan goods and khat. Kenya on its part, critically needs Somalia’s co-operation to weaken the Al Shabaab Islamist militants.