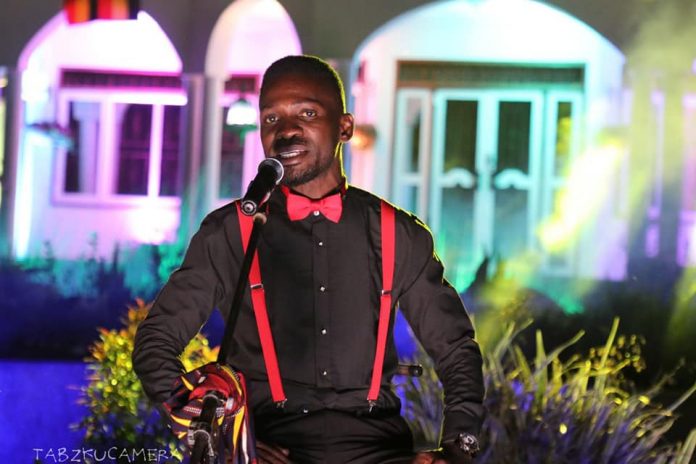 By Henry K. Otafiire
Bobi Wine’s show was a like an affair between love birds that had not seen each other in a long time. The longing. The anticipation. The feeling of seeing him back on stage was very fulfilling to his unwavering fanbase.
Was he going to tease his lover with a few kisses? Was he going to do prolonged foul play? Was he going to penetrate and thrust harder? Was he going to slowly grind? No one knew how the much awaited musical instrument intercourse would unfold and climax!


The dimly lit and flashing colors on his stage facing his mansion set the pace. After a long haul of being banned from holding a music concert, he had been unceremoniously divorced from the very craft that had shot him to stardom.
Last night’s online show was a beautiful love story that rekindled the feelings of his enstranged fans that had been missing his music. It was an orgy of beautiful music. He poured and sang his heart on stage. He pulled our backs from our chairs in our living rooms. He unbuttoned our blouses and it felt like the thrill of discovery a man experiences as a woman’s body is uncovered.
Through his sweet lullabies, we felt like he was massaging our paining muscles that had not been streched since this enforced incarceration. As he sang hit after hit, bras were released and erect nipples gave him a standing ovation.
We had never seen such sensation in a long time. His Rastafarian gaze was misty on our smart phones and he was rubbing our feelings onto an overdrive: state of great bliss and ecstasy. We started to moan softly as his obscenely talented musician Nubian Li came into the mix with his melodius voice. The bodies were covered with goose bumps and were shivering in front of their smart phones as his energyetic rhymes reverberated inside our private recesses.
We were wriggling and squirming with pent-up desire and wanted him to move faster, Like any great master musician who was having the rare opportunity to play a fine and perfect musical instruments, he was slow and deliberate as his ensemble touched and hugged their guitars.

As the show moved on, he was now fully in charge of our velvety secret places. He exploded like a wild animal that had been caged far too long. He started grinding us for a few minutes and our arousal sprang into new levels and we all yelled, Oh my God. Harder! Oh yeah! Oh yeah!. He stopped for a few minutes before launching rapid hit after hit. The music was rock hard and throbbing. His head covered in a thin film of sweat with desire and the veins stood out in protest like a prowling lion ready to devour someone. As we longed for more, he continued to shaft us in bits and in measured doses to tame our libido.
He moved between our legs and guided his empowering voice into our soft ear robes, whispering good times and reminding us how he has been missing us. We were again screaming and begging, wanting it inside. He teased us for a time by slipping it around the microphone but not sliding in.


He finally entered us, he rolled our hips to open himself completely to give us access. As we squealed with pleasure, he slowly pressed in. He was composed and calculative at first. When we grew more used to it, he was more frantic. As we felt the approaching eruption, he pulled out and reloaded his bullets again and teased us into another orgasm. When he finally cummed, he was pulling, squeezing our arms and legs capturing us to hold onto him inside.
As the midnight dogs began howling and wandering deserted streets, we prematurely climaxed. He was tired, weak and his voice fading. He had rekindled a desire we had been longing. The night had lived to it’s billing and we now lay in our beds exhausted but satisfied. We can’t wait to have another electrifying romp another time.