Home Politics Bobi Wine warns Museveni: Ugandans will rise up if you rig 2021... 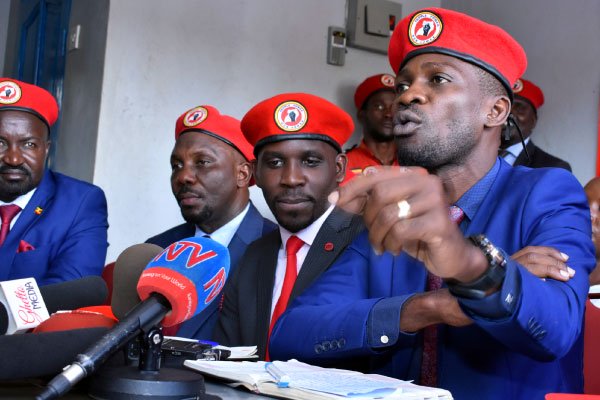 Presidential hopeful Robert Kyagulanyi also known as Bobi Wine was warned that Ugandans unlike in the past elections, will rise up should President rig elections come 2021.


Early this week, Wine, was listed in the Times 100 Next list of influential People announced he will start nationwide consultations as part of the process to prepare his presidential bid for the 2021 elections.
“I have never realistically experienced a Uganda with another president. And it is more than 80 percent of Ugandans that are in the same situation,” Bobi Wine, who was named as the male politician of the year by the Young African Leaders Summit said in an interview with Al Jazeera. ”

That really gets us disturbed. We have been denied an opportunity to contribute to our country. We have been excluded as a new generation. And we desire to contribute to building our country, which we know we are going to live in.”
“Certainly, the people making decisions for us are not going to be there to either benefit or suffer from the decisions – which are evidently wrong – that they are making for us.”


But Wine stresses that he does not believe in violence and that they are using and will continue to use “all legitimate and legal ways of defending our voice.”
“We are looking at breaking a dictatorship and having Uganda under civilian rule, which has never happened before.”
Bobi Wine told journalists on Tuesday in Kamwokya that he was finalising the draft of his manifesto and had already started fundraising from the public to raise money to support his campaigns for 2021.


Recently, , Bobi Wine met with Ugandans in the diaspora who pooled sums of money for his presidential bid
The EC roadmap for 2021 elections indicates that nominations for presidents will take place on August 20, 2020.

in the other news: Lesotho MPs exchanging blows in the House

Lesotho MPs exchanging blows in the House two days ago.😭😭 So sad and unnecessary! @CyrilRamaphosa @PresidencyZA Situation needs close attention. I say this mindful of the fact that SA has been doing its best to help there. pic.twitter.com/mxNm8IKHgj