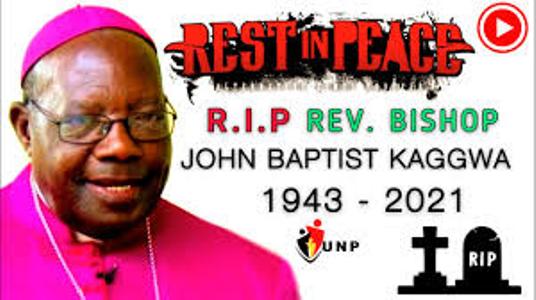 
The Bishop succumbed to Covid -19, which he has reportedly been battling for over two months
Under his stewardship, Masaka Diocese embraced many development projects, including construction of new schools, rental houses, farms and plantations and two shopping arcades.
One of the arcades in Masaka City was named after him and another in Kampala -all intended to generate more income to the diocese. The diocese also started a radio station, Centenary FM.

Who is John Baptist Kaggwa?
The Rt. Rev. John Baptist Kaggwa was born at Bulenga – Busega Parish 22nd March, 1943 in Kampala Archdiocese. He was ordained Priest on 12th December 1971 by the Late Emmanuel Cardinal Nsubuga at Lubaga Cathedral.
He was nominated Co-Adjutor Bishop of Masaka Diocese on Holy Thursday 13th April 1995 by the late Rt. Rev. Bishop Adrian Kivumbi Ddungu, assisted by H.E. Emmanuel Cardinal Wamala, the then Archbishop of Kampala Archdiocese and the Late Rt. Rev. Paul Kalanda, the then Bishop of Fort Portal Diocese and Chairman of the Uganda Episcopal Conference.


He became the Ordinary Bishop of Masaka Diocese on 10th January 1998 and he was enthroned on 22nd March 1998. Consequent to reaching the canonical retirement age, Pope Francis accepted his request to retire on 16th March 2019.
The late will be remembered for promoting social-economic development and open remarks on governance and political issues.