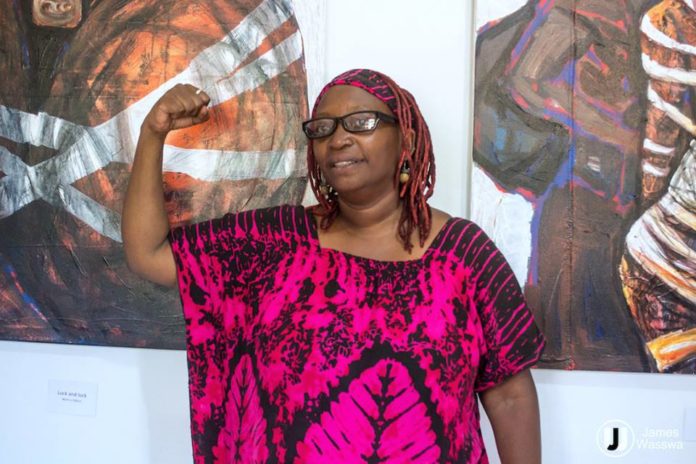 Doctor Kizza Besigye was this morning among the many that flocked Buganda Road court when Dr. Stella Nyanzi returned to Court for mention of her case in which she is accused of insulting President Museveni, calling the person of a president ‘’ A pair of Buttocks’’
Stella Nyanzi was charged and remanded to Luzira Prison on Monday, April 10th, until 25th April 2017.
However, her Lawyer Nicholas Opiyo asked for an adjournment of the case pending determination of their application by the High Court.


Last week, Stella’s lawyers sought redress from High Court so that she can apply for bail, after it was declined by the Buganda Road Court early this month pending clearance of the mental health test application. Tomorrow, High Court is expected to hear the bail matter. The case was adjourned to May 10.
Dr. Stella Nyanzi mental examinations were sought by the State prosecutor on 10th March 2017. Prosecution claims the accused suffers mental illness, requesting the court to issue an order for her to be taken for mental examination.

Dr. Nyanzi’s lawyer’s claim the state wants to use the mental test to declare their client an ‘idiot’ and send her to a mental health facility.
Defence lawyers also told chief magistrate James Mawanda Eremye that their client is denied certain rights which she is entitled to. Nicholas Opiyo noted that Stella Nyazi is, for example, denied other literature and limited only to the Bible. The lawyers also noted that Nyanzi is restricted from seeing her lawyers and close relatives


The chief magistrate said he could not grant any orders as requested for by Nyanzi’s lawyers, but expected prison to act now that the accused has formally complained.
Speaking after the court session, Besigye said he was not happy with chief magistrate James Mawanda Eremye decision, especially when Stella Nyanzi complained about her rights being violated in Prison.


The former presidential candidate told his supporters outside court that he will stand with Dr. Stella Nyanzi, who he says is being persecuted by the state.