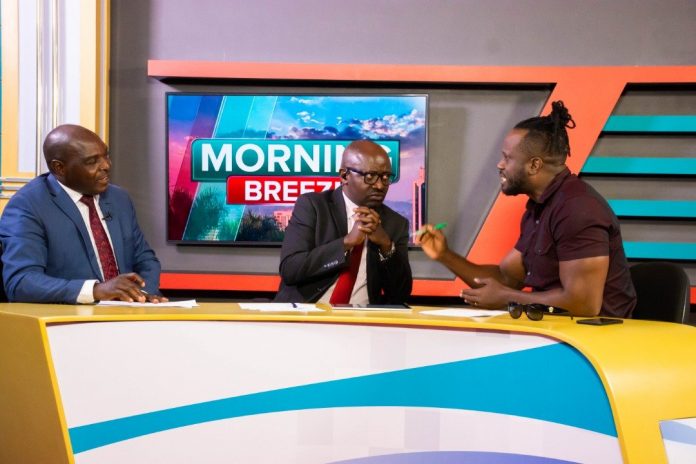 ‘ ‘Just because I’m the son of Jaberi Bidandi Ssali doesn’t mean he fathered me’’ Your interpretation of Bebe Cool statement is as good as ours.
Bebe Cool made the remarks on Wednesday while appearing on NBS Tv programe, Morning Breeze on He also revealed that his the ‘‘Maker of Bobi wine’’


‘‘I am actually the founder of Fire Base’’ Bebe Cool said
Fire Base is a music a group currently headed by People Power team leader and Kyadondo east MP Robert Kyagulanyi aka Bobi Wine
‘‘I created a group called Firebase that was intended to fight Jose Chameleone. I have grown up in the ghetto only that I don’t behave like them.’’ He said

‘‘I’m the maker of Bobi Wine in the Ghetto, I lived in Kamwokya and Kanyanya. All my life, I walked from Kanyanya to Mawanda road to Kitante Primary school.’’
Three years ago, Bebe Cool said “I grew up with my poor mother looking at Bidandi Ssali (his father) with a lot of money yet I had to foot every day from home in Kanyanya to school in Kitante,”


In December 2018, Jaberi Bidandi Ssali told daily Monitor that indeed Bebe Cool was his son ’ ‘ We are good friends with my son [Bebe Cool]. He normally comes here. He gives me regular maintenance allowance, so I have no problem with my son supporting President Museveni’’


Defends Catherine Kusasira’s appointment
On Catherine Kusasira’s recent appointment as special presidential advisor on Kampala, Bebe cool had this to say ‘ ‘When you position Kusasira, you’re strengthening the belief of women in the entertainment industry.’’
‘‘In the music fraternity, do you know how many women are struggling to make a living? Giving one woman a chance gives millions of girls the confidence to pursue their dreams. One of the things you might remember is that everything happens at the right time. Who else is better than Buchaman to advise the president about the ghetto?’’


He also said that he only speaks when necessary.’’ I don’t think giving someone an office is an achievement, I do my work as a musician. The moment you give me an office, you cut off my wings. I’m not interested in white-collar jobs.’’

.@SimonKaggwaNjal: Other than the money, what else attracts you to the NRM? @BebeCoolUG: Other than the vision, you mean? 25 years of my support for Museveni, I've recorded two albums supporting him. I used my resources and money. #NBSMorningBreeze #NBSUpdates pic.twitter.com/PhfTaT09mi