Musician Bebe Cool will not be hosting his annual ‘Tondeka Ekiwatule’ Easter weekend show this year.

The ‘Byebyo’ singer noted that he would instead be travelling abroad over the Easter weekend to get treatment for the bullet wounds he sustained years ago.

“During the Easter weekend, I will be travelling abroad to get more treatment for the bullet wounds I sustained years ago,” he said in a recent interview.

Bebe Cool, reaffirmed to his fans that the ‘Tondeka Ekiwatule’ show will resume on Boxing day during the December holidays as it has always been.

He says the decision to cancel the event on Easter is not in any way connected to the ‘Tubonga Nawe’ saga as he has always worked in losses at Kiwatule. 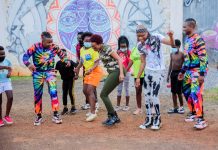