Home Politics Bebe Cool: am not part of ‘‘Museveni one Million Bazzukulu march... 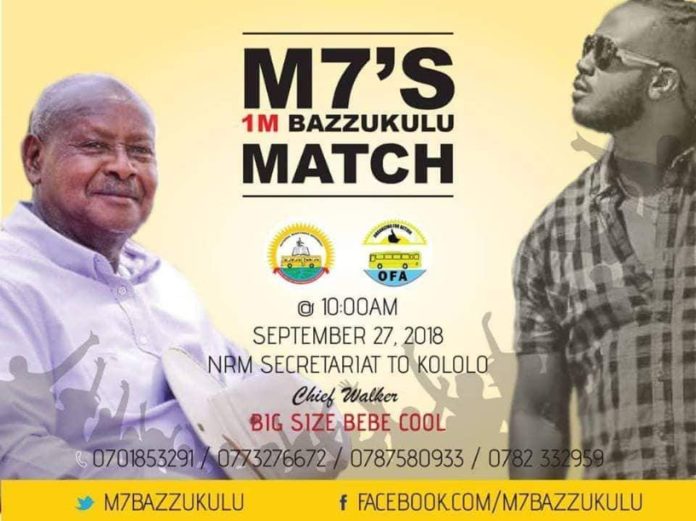 Bebe Cool has distanced himself from ‘M7 1M match’ campaign currently making rounds on social media.
According to the poster [which bears a photo of President Museveni and Bebe Cool], on 27th September 2018, president Museveni and NRM supporters are organizing over one Million supporters to match from NRM Secretariat to Kololo Airstrip.


And the chief Walker will be Big Size Bebe Cool
However, in a Facebook Post, Bebe Cool denied being part of the project.
‘‘Morning to all my music fans and NRM supporters, I would like to inform you that I don’t know this activity and am not part of it. Whoever came up with this artwork/Propaganda had very bad intention for my name/brand come this date.’’ He posted.

He added: The intention is that come this date, there won’t be people since no one is organizing it, so they can now do their propaganda that the NRM has no BAZUKULU/SUPPORT.
BUT,thank you for the great idea. I always tell my friends not all bad is bad, always look for something good in the bad and never ignore the fact that there is always something bad in every good.

‘ ‘Well, whoever did this could have just given the LION it’s meat. Watch the space.’’