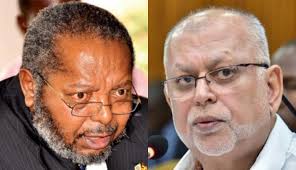 Bank of Uganda says it will appeal against the whole of the decision given by Hon. Justice David Wangutusi on August 26, 2019
The Commercial Court in Kampala, on Monday dismissed a multibillion commercial dispute filed against Sudhir Ruparelia by Crane Bank in receivership.


In his ruling, David Wangutusi, observed that Crane Bank in receivership at the time of instituting the commercial suit against the businessman and his Meera Investments company, was none existent, hence never had powers to sue.
“In conclusion, the plaintiff/ respondent (Crane Bank in receivership) did not have jurisdiction to file HCCS no. 493 of 2017. It’s also my finding that the property the plaintiff was seeking when she filed the suit on June 30th 2017 had earlier been given away by the receiver to Dfcu bank on 24th January 2017, four days into receivership and five months before filing of this suit this leaving the plaintiff/ respondent with no property,” the court ruling reads in part.

The Court further condemned BoU to costs that Dr Ruparelia had spent in prosecuting this law suit, on grounds that it’s the one that lodged the suit on behalf of defunct Crane Bank.
In statement issued on Tuesday evening, Bank of Uganda says it has already filed a notice of Appeal Application 320 of 2019 filed in the High Court
‘ ‘Crane Bank (in Receivership) is dissatisfied with the decision of the Hon. Justice Wangutusi, and has served a copy of the Notice of Appeal to Kampala Associated Advocates, the legal representatives of Mr. Sudhir Ruparelia and Meera Investments Limited.’’ Bank of Uganda statement reads in part.


While Hon. Justice Wangutusi dismissed the UGX397 billion case against Mr. Ruperalia on a technicality, alleging that Crane Bank (in Receivership) lost its powers to “sue” and to “be sued”, thus rendering its suit a nullity.
However, Bank of Uganda in statement says ‘ ‘Crane Bank (in Receivership) maintains that receivership is a management situation, and hence no legal change as to capacity of a company to sue and be sued.’’
Bank of Uganda has assured that it is committed to pursuing this matter to its logical conclusion.