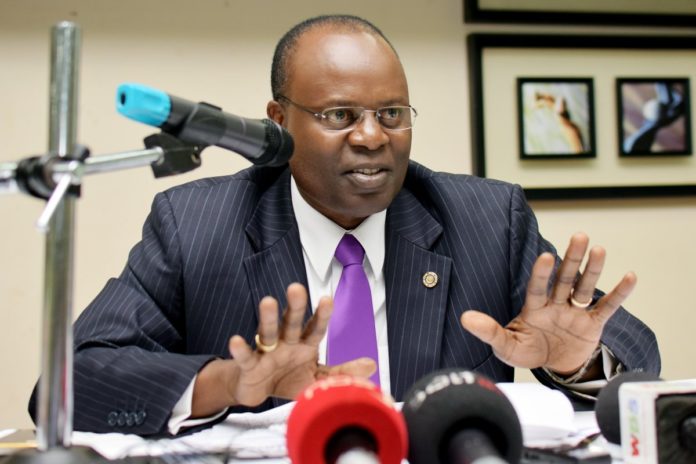 In brief statement issued on Wednesday, the central bank Deputy Governor, Prof Kasekende revealed that the bank has an adequate reserve buffer equivalent to 4.9 months of imports of goods and services as at April 2018
Bank of Uganda says the weakening of the Uganda shilling against the US dollar is driven by global strengthening of the dollar and the unfavourable balance of payments due to strong demand for imports especially from manufacturing, energy and trade sectors


‘‘The Bank is not indifferent to volatility in the foreign exchange market especially when it is unduly driven by speculative trading. Bank of Uganda stands ready to intervene in the forex market whenever we deem the currency movements to be disjointed with economic fundamentals.’’ He said.
He added: Bank of Uganda is committed to a market determined exchange rate that supports the economy’s adjustment to changes to the balance of payments.

Reactions from Ugandans
Muhereza Kyamutetera‏ @StKyamutetera: Good explanations, but it does not take away the pain. I am sure other serious countries elsewhere are doing something about it, beyond this good story-telling
Rtn. Amanya Duncan‏ @RtnAmanya : What shall we ever get right and be proud of as a nation? Currency strength?, Taxes? Fuel? Salary? Employment? Environment? Security?….name it, Even paraffin/kerosene is not affordable in villages,. =
Nkugwa Julius‏ @JuliusNkugwa : we always have the best explanations for everything. It’s time for these statements to end with “and we are taking … steps to achieve…”


Emma Ssembatya‏ @Ganda_stone : About the #BUBU campaign, what strategies are there in place to boost the local industries and protect them from external competition as a way of boosting the value of the UGX against the USD and trying to balance our BOP deficits?
Wako Joel 🇺🇬‏ @wakojoel : Probably we need a new currency the way we had change of currency in 1987
David N. Wozei‏ @davidwozei : Have you considered that another reason may be poor control over Forex business done especially by Commercial Banks, Bureaus for both inflows and outflows? Has BoU also considered fixing a rate at say 3800shs like they do in Dubai, UAE and you have only marginal in differences?

read:Bank of Uganda intervenes to save the sinking shilling

read: Uganda shilling weakens to an all-time low, now selling at 3900 to a dollar