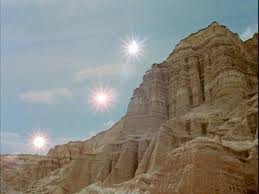 Astronomers have discovered a planet with three suns, where an observer would experience either constant daylight or triple sunrises and sunsets depending on the seasons, which last longer than a human lifetime.

The planet, HD 131399Ab, is the first discovered in a stable orbit in a triple-star system; previously, it had been assumed that the unstable gravity would result in any planet being quickly flung out.

Kevin Wagner, who discovered the planet and led follow-up observations, said that “for about half of the planet’s orbit, which lasts 550 Earth years, three stars are visible in the sky.”

“It is not clear how this planet ended up on its wide orbit in this extreme system, and we can’t say yet what this means for our broader understanding of the types of planetary systems, but it shows that there is more variety out there than many would have deemed possible.” Kevin Wagner said

The CNN reports that new planet found using the SPHERE instrument on the European Southern Observatory’s Very Large Telescope, which is sensitive to infrared light, allowing it to detect the heat signatures of young planets.